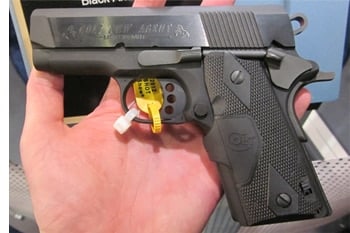 If you’re unfamiliar with the Colt New Agent, then you’ll probably just see it as another pistol equipped with laser grips. But for those who are familiar with it then you may be pleasantly surprised.

To keep everything snag-free, Colt engineers removed the front and rear sight and replaced it with trench sights, basically a channel along the top of the slide. Needless to say adding the laser grips opens the pistol up to another market because the trench sights can be difficult to use for inexperienced shooters or those new to shooting compact guns. Also, if you run out of bullets you could shine the laser into the assailant’s eyes–blinding him instantly.

Other than adding laser, the pistol is unchanged. It still has a compact 1911-design, it has a three-inch barrel, the .45 holds a six-round magazine, and the 9mm holds a seven round mag.

The laser grips are incredibly easy to use, too. They automatically activate when you wrap your hand around the grip. The button is on the front of the grip and the laser beams out near the slide.

Colt spokesman said the plant is currently manufacturing the New Agent with laser grips and it’ll ship in just a few weeks, so expect it in stores sometime in February.