Over the past several months, there’s been a trend going on in New York City involving out-of-state, law-abiding gun owners and their concealed-carry firearms.

Some would argue that it started with Ryan Jerome, a former Marine and Indiana jeweler who was arrested on Sept. 27 for reporting to the Empire State Building staff that he was carrying a .45 Ruger that needed to be checked while he toured the famous building.

Next it was Mark J. Meckler, the co-founder of the Tea Party Patriots, who was arrested at La Guardia Airport on Dec. 15 for disclosing to a ticketing agent that he had a locked box that contained a Glock pistol.

Then it was Meredith Graves, a Tennessee nurse who was arrested on Dec. 22 for trying to check her .32-caliber Kel-Tec pistol at the 9/11 Memorial.

Now, the latest is Fred Vankirk, an Ohio resident who was arrested on Jan. 7 after a hotel worker dropping off room service spotted one of Vankirk’s guns sitting on a nightstand in his room at the Radisson Hotel.

The worker alerted security; who, in turn, immediately called the police.

Vankirk, who was visiting the Big Apple brought with him three firearms, two .357 Magnums and a .45 semiautomatic, for protection.

When the officers showed up at his hotel room, Vankirk told them, “I have three guns in the hotel room. Is that what this is about?” a court complaint alleges.

Vankirk was charged with three counts of second-degree criminal gun possession, each of which carries a potential sentence of five to 15 years, to be served concurrently if he is convicted. 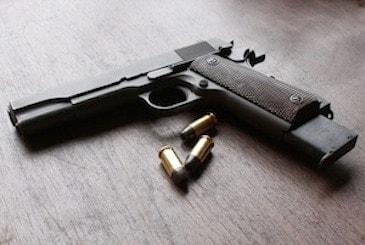 Vankirk has no criminal history and is in possession of a valid Franklin County (OH) CCW permit, according to sources.

How long will this trend (of law-abiding gun owners getting arrested in NYC for illegal gun possession) continue?

Moreover, who is to blame for this, the gun owner or NYC’s strict gun laws?

Lastly, what is an appropriate punishment for these well-intentioned criminals?

It should be noted that if the charges stick, there is a mandatory minimum sentence of three and a half years in prison.