Surplus 7.62x54mmR and its Rifles Allows For Shooting Through the Ages

While the Soviet Union may have lost the Cold War it certainly wasn’t for lack of trying, and today its efforts are still be felt around the world – notably in Africa where wars still are waged with surplus weapons. But on the commercial front gun enthusiasts have seen an increase in the availability of surplus ammunition from the Communist Bloc, much of it offered for sale in the original metal tins and wooden shipping cases. 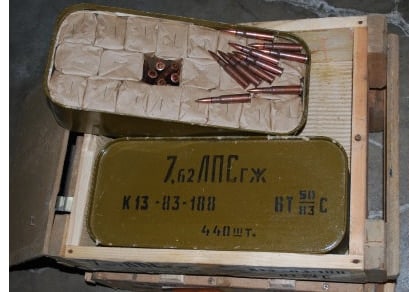 The two most common rounds available are the 7.62x54mmR and the related 7.62x39mm; the latter being among the most popular small arms cartridges today thanks to its use in the AK-47 assault rifle and commercially available semi-automatic versions. But it is the former, the 7.62x54mmR that today has the unique distinction of having the longest service life of all military issued cartridges in the world. Just last year the cartridge reached its 120 year in service, and thanks to the Soviet’s efforts, in constant preparation for war, it is widely available in surplus.

The rimmed rifle cartridge was developed, ironically enough, even before there was a Soviet Union, and it has remained in service today, 20 years after the fall of the Communist “Evil Empire.” The cartridge was first designed for the bolt-action Mosin-Nagant rifle, which is also arguably one of the most widely produced firearms ever – with the possible exception of the much later AK-47.

In fact between 1891 and 1965 some 37,000,000 of these were produced, and it was the most common bolt action rifle used in the Second World War. The Mosin Nagant actually has an interesting history in that it incorporated two designs and features from two different designers including Sergei Ivanovich Mosin, a captain in the Imperial Russian Army, and Belgian gun designer Leon Nagant.

While movies, TV and video games may suggest that every Red Army soldier fighting for the “Motherland” was armed with the PPSh-41 sub-machinegun, the truth is that most Soviet soldiers carried the rifle design that their fathers likely carried a generation earlier in the Russo-Japanese War, the First World War, Russian Revolution and Russian Civil Wars. The Mosin Nagant, which was fairly uncommon for collectors before the fall of the Soviet Union, today is widely available, often times for well under $100.

Were it just for the Mosin Nagant the 7.62x54mmR cartridge would have an impressive 50 plus year run, but the story doesn’t actually end there. The cartridge was utilized in the DP-28 light machinegun, which has been nicknamed the “record player” because of the round magazine mounted on its top, as well as the Samozaryadnaya Vintovka Tokarea (Tokarev Self-loading Rifle, Model 1940) or SVT-40, the Soviet’s primary semi-automatic rifle used during the Second World War.

The Red Army looked to replace the Mosin Nagant with the SVT-40, and on paper one third of all rifles would be this model. This did not occur, thanks in no small part to the German invasion in 1941. However, some five and a half million of the rifles were still produced, an impressive number but yet a far cry from the 37 million Mosin Nagant rifles. It is also worth noting that production actually decreased as the war went on, because the SVT-40 didn’t live up the demands of the Red Army, and the Mosin Nagant production was stepped up. However, SVT-40 was exported in large numbers beginning in the 1980s and collectors today can still find rifles in excellent shape – even unissued – for under $1000. Compared to the prices for the German G43 semi-automatic rifle or the American M1, the SVT-40 could almost considered a bargain.

It was also worth noting that it was during the war that the Soviets developed the intermediate 7.62x39mm cartridge for the RPD (Ruchnoy Pulemyot Degtyaryova) light machinegun and the SKS semi-automatic rifle. Neither weapon arrived in time to see use during World War II, but that smaller cartridge found new life, and longevity, with the AK-47. However, the 7.62x54mmR hadn’t seen its end.

The bullet was used in the Dragunov (SVD), which was first introduced in 1963, more than 70 years after the 7.62x54mmR was first adopted for the Mosin Nagant. This rifle remains in service today with the Russian Army, as well as the Chinese Red Army and with other military forces around the world. While original Soviet era ones are hard to find, and even pre-Assault Weapon ban version ones are rare, the Romanian lookalike PSL is still available.

For shooters this provides a very rare opportunity to use the same cartridge in rifles from three distinct periods, the First World War, the Second World War and the Cold War. All three rifles provide a serious kick, and quite a bang. Simply put the SVT-40 is one loud firearm.

Today it is easy to find a cleaned up Mosin Nagant with re-chromed barrel, making for a reasonably accurate firearm, while as noted the SVT-40s can be found as well in good condition. The PSL by comparison is often offered online and through dealers brand new in the box. The result is that rare chance to use a single sized cartridge for three very different types of firearms. The only close comparison would be the American Springfield 1903 bolt action rifle and the M1 Garand, or the German K98 bolt action rifle and the G43 semi-automatic. However, neither of these adds the Cold War era version.

So for those with an interest in history, there is nothing like heading to range with a can of surplus of Soviet Bloc ammo, and taking a trip through time with three very remarkable rifles. Just be warned that your shoulder will feel it the next day.