The drug wars in Mexico “ain’t no joke.”  Since President Felipe Calderon launched his crackdown on drug cartels in 2006, there have been 47,515 drug-related killings.

Figures released by Mexico’s Federal Attorney General’s office (PGR) showed that 12,903 people had been killed in drug-related violence during the first nine months of 2011, the BBC reported.

All in all, there was an 11% rise in murders in 2011 (if there’s a silver-lining, it’s that the 11% rise is less precipitous compared with previous years).

Taking note of these startling statistics is the Texas Department of Public Safety, which has vowed to keep Texans safe from the drug cartels responsible for much of the carnage and bloodshed occurring just south of the border.

In order to live up to that mission, the Texas Highway Patrol must be able to fight crime and drug trafficking in and on all earthly domains: air, land, and sea.

And the latest addition to the Texas Highway Patrol is a seagoing vessel, a 34-food powerboat that is armed to the teeth.

With six 30-caliber machine guns divided among four firing positions, the new patrol boat has enough firepower to give any narco-trafficker attempting to smuggle drugs along the Rio Grand a run for his money. 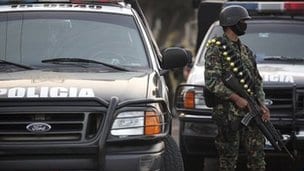 The DPS has appropriated funds to build six of these tactical boats.  A new, specially trained Marine Unit of the THP will operate the boats along the Rio Grand and other waterways like Falcon Lake, where an American tourist was recently murdered by cartel operatives.

“It’s an area that the Zeta drug cartels are notorious for bringing drugs into the United States across that lake at night,” explained Texas congressman Ted Poe.

Poe tapped his finger on a photo of the tactical speedboat. “This will help stem the tide of the Zetas coming into the US.”

However, not everyone is on board with the new tactical boats.  Especially when they see the price tag on these bad boys.

According to reports, each boat will cost approximately $600,000.

During a period of economic privation, spending millions of taxpayer dollars on heavily armed tactical boats seems a bit imprudent, at least to some (see video below).

What do you think of THP’s new tactical boats?  Good investment or unnecessary expense?