Arizona to Lead its Own Investigation into Operation Fast & Furious

Not fully satisfied with the way the Fed is investigating the Bureau of Alcohol, Tobacco, Firearms, and Explosives’ horribly flawed gunwalking program known as Operation: Fast and Furious, the State of Arizona has launched its own probe into the matter.

Yesterday, at the state capitol, House Speaker Andy Tobin told reporters why he felt his state should get involved.

“This happened here in our state,” Tobin said.

“This happened to people who lived here and worked here,” he continued. “And now a Border Patrol agent who worked here was killed here.”

Tobin is referring to Border Patrol Agent Brain Terry who was shot dead in 2010 near Rio Rico.  At least two of the weapons recovered at Agent Terry’s crime scene were linked to Fast and Furious. 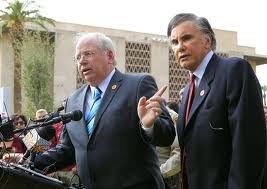 To avoid federal scrutiny for the state-led probe, Tobin’s calling it a fact-finding mission.

But it may be more than just a simple “fact-finding” mission, as lawmakers on the committee will have subpoena power.

First, he said, it is to determine whether federal agents broke any Arizona laws in allowing stawbuyers to purchase nearly 2,000 firearms without any planned interdiction strategy or direct means of tracking the firearms.

And the second goal, according to Rep. Smith, is to see if state laws need to be amended to ensure an operation like Fast and Furious never happens again.

Remember, Arizona lawmakers are not afraid of putting laws in place that enforce federal law not being properly executed (Arizona passed S.B. 1070, the controversial immigration law that mirrored standing federal law that the government opted not to enforce on a consistent basis).

But Rep. Smith also voiced concern about the way Arizona FFLs were treated by the ATF during the operation and how he hopes this investigation will lead to changes that help prevent future maltreatment.

“They were forced to sell guns when they didn’t want to and threatened to have their licenses taken away from them” if they did not cooperate, he said. “We want to protect Arizona citizens from this type of conduct.”

The committee is expected to file a report by March 30.

Arizona Attorney General Tom Horne has agreed to review the committee’s findings, but expressed unease about how much action his office would take on the report (It would be difficult for a state Attorney General to prosecute federal agents, ATF and DOJ officials).

We’ll continue to keep you updated on this state-led investigation.