The Performance Shop M2 3-Gun Edition starts off with a shorter barrel, at 21 inches long, which is almost exactly the length of an eight-shot magazine tube with a Teflon-coated follower.  It uses Crio chokes, like other M2s. 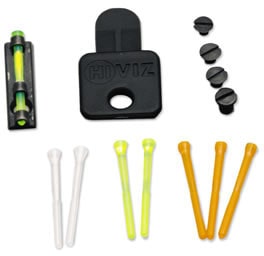 The internals get special treatment, with this shotgun receiving a trigger job before it leaves the factory, along with an enlarged, flanged loading port.  Then it gets fitted with a HIVIZ fiber optic front sight, and comes with extra parts to change out the color and diameter of the light pipe.

The Performance Shop M2 3-Gun Edition also gets Benelli’s ComforTech stock, which is, you know, “scientifically proven” to reduce felt recoil by 48 percent.  We will say this about the stock, that it is rather comfortable.  And full of tech.

The magazine extension is made by Nordic Components, along with the enlarged bolt release button.  In other respects, it is similar to other 12 gauge shotguns of its type.  It’s 42½ inches long, weighs 7.1 pounds, and has all-synthetic furniture.

It all comes down to the price: MSRP is $2700, which, even in real-world prices, is close to double what an M2 Field or Tactical runs.  Granted, after a trigger job and all the upgrades, you’d be out a couple of benjamins, but probably still well under two grand.

We like this scattergun and do think it’s just about perfect for 3-Gun competitions, not to mention pretty much everything else you can do with a compact, high-capacity shotgun.  We think it’s going to earn Benelli a pretty penny, to boot.

If money’s no object, by all means, this is a gem.  But it isn’t for anyone on a budget.  What do you think, are these tweaks and upgrades worth it, or better off done by yourself?