What would you pay for a .45-caliber Thompson submachine gun, Model 1921A, believed to be owned by the notorious, bank-robbing duo Bonnie Parker and Clyde Barrow?

Well, if you had somewhere in the vicinity of a $130,000 of cash on hand, you may have been able to score this unique piece of outlaw history because that’s what an anonymous online bidder reportedly paid for the weapon at an auction in Kansas City, Missouri, this past weekend.

“It’s hard to put a value on something like this,” said auctioneer Robert Mayor. “At the end of the day, we like to say it’s worth what someone is willing to pay for it.”

Ain’t that the truth.

Michael Brown, a curator for a gangster museum being built in Las Vegas, came all the way from Sin City to bid on the gun.  He was ready and willing to drop $115,000 on the ‘Tommy.’

“Very few guns out there have such historical value, and that is one of them we were trying to acquire,” Brown told the Kansas City Star after the auction had ended. “We took a gamble. We set a price ceiling. You have to take the emotion out of it, so we had a price that we were willing to go.”

Also being auctioned off was another spectacular item, the infamous couple’s 12-gauge 1897 Winchester shotgun.

The winning bid for the shotgun was $80,000 – placed by that same anonymous online bidder. 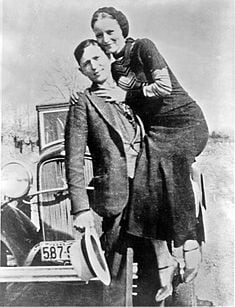 So, if you’re keeping track, that’s 2 Guns for $210,000 (although, there’s been conflicting reports about the precise number, some news outlets have reported it was $180,000 for the two guns).

Both guns were recovered at a crime scene where the couple had a shootout with police on April 13, 1933, in Joplin, Missouri.

Bonnie and Clyde managed to escape that day.

However, it was long before they got what was coming to them.  In May of 1934, the two were ambushed by police and shot dead in Bienville Parish, Louisiana.