A Sweeping History of the Mauser C96 Broomhandle Pistol

It’s one of those guns that turns heads and a great number of shooters over the years, from soldiers to generals from directors to royals, have holstered the unconventional C96  ‘Broomhandle’ Mauser to seemingly elicit this very response from would-be onlookers.

Yet, aside from its design choices (and, as we’ll see, flaws), the C96 pistol, chambered in either 7.63x25mm or 9mm Parabellum, was a considered one of the best sidearm options out there when it first debuted in 1896.

The reigning high velocity pistol of its day, the world would not see a hotter handgun until the introduction of .357 Magnum cartridge in 1935.  And around the turn of the century, it seemed like just about everyone, from Germany to China, was making them.

The Gun That Mauser Didn’t Want Made

Despite the name, Paul Mauser did not design the Mauser C96. Credit goes to the Feederle brothers, Fidel, Friedrich, and Josef.  Fidel was a higher up in one of Mauser’s workshops and he and his brothers worked up a prototype in this facility (without the knowledge and then against the wishes of Fidel’s big name boss) for what they called the P-7.63 or Feederle Pistol. 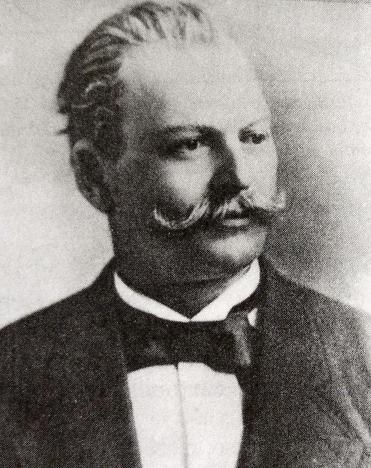 In spite of his reservations about the broomhandled handgun, Mauser was a businessman first (as it turns out, most gun tycoons are) and, with the oddly alluring design finalized in ’96, he put the pistol into production at his Oberndorf-Necker factory in Germany.  Originally called the “Mauser Military Pistol” (in hopes of courting lucrative military contracts) not a single country’s armed forces adopted it as their primary sidearm—though this didn’t stop Mauser from continuing production of the weapon until 1939 as the gun caught fire on the commercial market in other countries.

The first group to truly embrace the pistol were British officers and this was largely the fault of legendary British gunmakers Westley Richards, who imported and resold C96s for private purchase (usually from military personnel).  This lead to a taste for imported Broomhandles among the middle and upper classes and the C96 sold out in its first year of manufacture.  It would maintain this pace right up until the start of WWI. 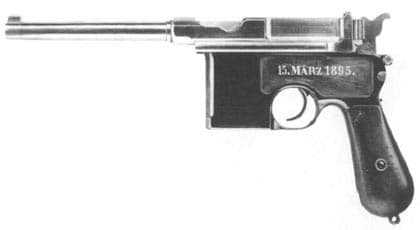 The first C96s were pure, albeit unorthodox, handguns—a box magazine in front of the trigger, a longer barrel and the namesake grip that to some eyes is shaped like a broom handle. It came with six, 10, or 20 round magazines and, because the muzzle velocity was so high, the gun was “approved” out to almost a 200 foot maximum effective range.

Later models however began to sprout various odd appendages such as wooden shoulder stocks that doubled as carrying cases or holsters or lengthened or widened the grips and barrels.  Indeed, the length of the barrels in some models was so long, some derivative could be considered carbines. Other variants included, in addition to the shoulder stock/case, holsters that would accommodate a host of strange assortments like spare clips, cleaning tools or other survival gear.  Some examples even have clips on the weapon to attach accessories.

The very first military model was produced in 1912 and used throughout World War I. It had a barrel length of 5.51 inches, and was one of the derivative models that sported a shoulder stock and brown leather holster. The military models originally fired the 7.63mm rounds, but the demands of the war forced makers to upgrade to the more powerful 9mm Parabellum rounds. Those models had a large red number 9 engraved into their butts (and are among the most collectible C96s). They weighed 2.69 pounds, had 10-round straight-box magazines, and had a muzzle velocity of 1,420 feet per second for the 9mm rounds.

Some C96 variants even had fully automatic capabilities but the rate of fire was so high on auto that a 20 round magazine was gone before the shooter could bring the weapon to bear on a downrange target.  Handguns are not well suited to fully auto firing mode as the recoil pushes the muzzle upwards even in the hands of an expert and the ammo was usually spent before you could arrest the muzzle climb. On semi-auto it was a different story as the pistol performed very well when fired singly or with bursts of two or three rounds.

Around the World from Germany to China

Mauser manufactured approximately one million C96 pistols between 1896-1939 but that number does not reflect the unknown thousands and perhaps millions produced in Spain and China.  These figures have been largely lost to history because of poor record keeping from manufacturers in these countries. 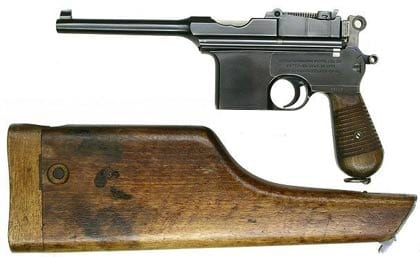 The list of wars and colonial insurrections that this weapon saw service in would make your eyes to glass over but notably it was carried by Winston Churchill in the Battle of Omdurman, Ethiopian Emperor Haile Selassie, T.E. Lawrence (a.k.a. Lawrence of Arabia) during his adventures in the Middle East and of course Han Solo  (Lucas chose the C98 as the design for Han’s DL-44 Heavy Blaster in the Star Wars Trilogy).

The biggest end user ended up being China, initially during the Chinese Civil War and eventually as a military and police staple. In China the C96, now called the Shanxi Type 17, was unique in that it was chambered in .45 ACP and nicknamed the ‘box cannon’ (盒子炮) due to the square shape of its internal magazine and the fact that the weapon was carried in its own “box”, actually a holster that doubled as a detachable stock. Other famous Chinese models were the Hanyang C 96 and the Type 80. The Spanish names were the Astra Model 900 and the super rare “Royal” MM34 machine pistol.

Swept Into the Dustbin of History

When the gun worked, it was a formidable weapon, but glaring design flaws held the gun back as shooters began to favour other modern semi-automatics. The first stumbling block (and the one from which all other problems stemmed) was the devices damnably complicated cartridge feeding system.

Rounds were fed into the magazine in front of the trigger mechanism from above by means of a strip clip. This system was clumsy but functional. The real problems came during the intricate set of internal processes that had to be performed before a casing could be ejected and the next round chambered.

Like many handguns, the bolt slid to and fro in a barrel extension.  Upon firing the weapon however (or more accurately pulling the trigger through), a locking assembly underneath the bolt would seal off the breech through a system of tongues.  Delaying the bolt movement delayed the action by a split second and was meant to keep the chamber closed until any built up pressure had dropped to a safe level. After that, the bolt was allowed to move back in order to carry out the cycle of extracting and ejecting the spent round casing, and then reloading and recocking the weapon for subsequent use, courtesy of a return spring.

It sort of boggles the mind. For what it’s worth, the gun did work, it just took a very long walk to get there and this extremely complicated cartridge feed system caused so many problems in the field (field maintenance was almost out of the question) that it eventually led to the military model’s demise.

The second reason was the cost.  Seeing how convoluted the mechanics of the gun were, it should come as no surprise the Broomhandle was downright expensive to manufacture.  So expensive in fact it was totally cost prohibitive to equip any sizable number of ground troops with them (and contributing to the fact that the C96 was usually an officers gun).  When military brass moved on to designs like the Colt 1911, the Broomhandle began its steady decline in popularity.

The Trials of Collecting the C96 Mauser 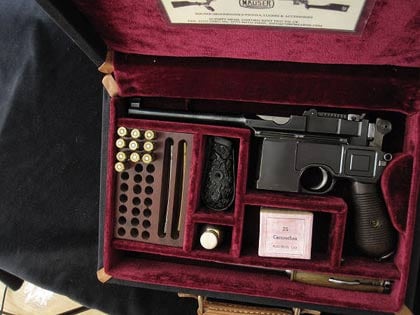 As mentioned earlier, the C96 was mass-produced not only in Germany but also in China and Spain, presenting a veritable minefield for the unwary historian or collector.  The first issue a prospective collector has to contend with is this: Mauser never licensed the Chinese and Spanish versions, making these “unauthenticated” models less desirable on the collectors’ market than ones made in Germany (though this is not to say a foreign made Broomhandle, like the rare Spanish Royal, is worthless).

Complicating things further is this cold hard fact: all of Mausers records burnt up in 1945 when the Allies took Germany, meaning even the Germans have a hard time authenticating whether a C96 was actually made in the Faderland.  Still, this doesn’t mean collecting Broomhandles is fruitless or a money pit.

For starters, because there were so many produced and so little documentation to support them, Broomhandles are usually priced to move in shops and can be found at auctions and gun stores at reasonable prices.  Second, there actually are indicators on the pistol that can determine the date and the country of origin.  For example, if you come across a Mauser C96 with a faded red number 9 engraved into the butt, you’ve just found an original example from the 1912 run and easily a $10,000 handgun. Finally (and once again because of the guns proliferation and lack of identifying paperwork) historians acknowledge that there are still Broomhandle pistols carried by historical figures that are known to exist but are currently floating around “lost” on the market. The gun carried by Emperor Selassie, for example, is still out there and would fetch a pretty penny at auction.

Accordingly, new collectors would do well to close read their history books when evaluating a C96 for purchase.