This past August, the Ultimate Fighting Championship (UFC) promotion company penned a seven-year deal with Fox Broadcasting reportedly worth as much as $90 million per year.

Many argue that the lucrative deal solidified the UFC’s position as the preeminent mixed martial arts brand.

However, the UFC and its affiliates have learned that signing such a deal comes with certain strings attached, that there are tradeoffs when an organization becomes bedfellows with a major television network.

One of those tradeoffs includes an advertising and sponsorship ban for all companies who sell, make, and/or distribute guns, knives, ammunition, and hunting-related products.

The ban, which took effect on Monday, extends to all UFC events, not just the ones that are scheduled to broadcast on Fox’s network of channels (Fox, FX or Fuel TV).

“There’s people out there that are still in charge that have very limited views in their thinking as in, ‘Ooh, guns are violent. Guns are bad,'” Irwin told MMAJunkie.com, a leading source for MMA news and information.

“They don’t realize that this is part of our Second Amendment rights,” he continued. “People have the right to bear arms and defend themselves.”

Some, including Irwin, have argued that the people hurt the most in this situation are not the gun shop owners, the UFC, or the pro-gun fans of the UFC.  Rather, it’s the new, up and coming fighters who are in need of sponsorship money that are ultimately impacted by this restriction. 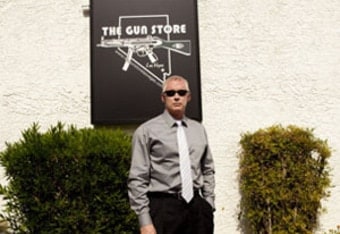 “If you’re not at the pinnacle of this league, if you’re not Georges St-Pierre or the Diaz brothers or those guys up there, some of these guys don’t make a lot of money,” Irwin pointed out to MMAJunkie. “This is really all they have.”

In the past, Irwin has sponsored numerous fighters including, heavyweight Shane Carwin and lightweight Spencer Fisher.

When asked about the ban UFC President Dana White had a terse and seemingly callous reply.

“As we go international, a lot of these other countries will not allow it on TV,” White posted on a popular MMA forum, The Underground. “There are quite a few issues with it. Fun while it lasted.”

Yet despite White’s ostensible lack of compassion for his former sponsors and affiliates, Irwin doesn’t hold the UFC President accountable for capitulating to Fox’s demands.

“I don’t think for a second this has anything to do with the UFC office,” Irwin said. “I’ve talked to Dana White before. He was incredibly cordial with me. I know a lot of people over there, and I’m just very well-received over there. We have a good working relationship, and I think this is just something where the UFC’s hands are tied due to the network.”

While one can certainly appreciate Mr. Irwin’s assessment of the situation, one gets a strange feeling that Dana White tapped out a little too quickly with respect to this gun-related sponsorship ban.

For once, it would have been nice to see someone like Mr. White fight for his principles (assuming he’s pro-gun) and not just a fat paycheck.