Masterpiece Arms has been gearing up for this year’s SHOT Show, and brought to it a handful of new and improved firearms and accessories.  The one that turns heads, though, is the MPA57SST: a MAC clone chambered in 5.7x28mm. 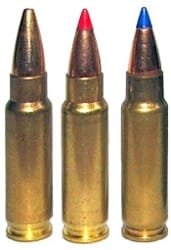 MSA will be bringing to market two 5.7mm firearms, a pistol and a carbine, the pistol with a five-inch barrel and the carbine sixteen.  A quick look-see and these guns don’t look a hundred percent Ingram, and they’re not.

Like other MSA pistols and carbines, these two have a left-side charging handle and a top rail for optics, and have standard-threaded ½x28 barrels for universal silencers and muzzle devices.  The ones in 5.7mm also have a pretty different grip style, and it isn’t just to house the long small caliber cartridges.

The MPA57SSTs are built with the Five-Seven in mind; they use standard FN magazines.  The pistol comes with a single 20-round mag, the carbine, an extended 30-rounder.  The grip is also somewhat angled, not straight like it is on the other MAC-style MPA firearms.

We’ll have to see for ourselves how 5.7x28mm handles out of a blowback firearm, but we seriously doubt recoil or muzzle rise will be an issue considering that these weigh around four pounds.

Time will tell if these turn out to be popular alternatives to the much more expensive FN Five-Seven ($900+) or P90/PS90 carbines ($1300+).  The MSRP on these MPA57SSTs is $600; the real-world price should be a little less than that.  We’re happy to see other manufacturers playing around with the cartridge, and no doubt will 5.7x28mm fans be, too.

The pistol’s on its way to stores now, and the carbine shouldn’t be too much longer in waiting.