It didn’t take long.  It was on a Friday (Jan. 13) that a federal judge upheld the Obama administration’s mandate requiring firearm retailers in four states along the U.S.-Mexico border to report the multiple sales of certain semi-automatic rifles.

And it was that following Monday (Jan. 16) that the National Shooting Sports Foundation (NSSF), the trade association for the firearms industry, filed a notice of appeal.

To give one a sense of the history of this legal battle, it all started in the spring of last year when the Obama Administration in conjunction with the Bureau of Alcohol, Tobacco, Firearms and Explosives and the Justice Department instituted the multiple tracking requirement (the final proposed rule was made public on April 29).

In detail, the measure requires over 8,000 FFLs in California, Arizona, New Mexico, and Texas to file reports with the ATF when individuals purchase more than one semi-automatic rifle – with detachable magazine, greater than .22 caliber – within a five day period.

The PR being pumped out of Washington at that time was it would thwart illicit gun trafficking along the U.S.-Mexico border where strawbuyers purchase ‘assault weapons’ for Mexican drug cartels.

At that time, all the details surrounding the severely flawed gunwalking program Operation Fast and Furious had not yet surfaced, so the pumps were still relatively primed for such a maneuver, i.e. the public was largely unaware that the ATF was, in fact, allowing guns to freely walk across the border.  And later, ATF officials would use details from Fast and Furious as a means to push the multiple tracking mandate.

Over the summer, the NSSF filed a lawsuit (NSSF v. Jones) arguing that the ATF exceeded its lawful authority under the Gun Control Act by enacting such a measure without the consent of Congress.

A ruling on this lawsuit was, as mentioned, finally rendered this month.

Judge Rosemary Collyer, ruled that there was no abuse of authority.  She found that the ATF’s requirement was both rational and narrowly tailored enough to comply with the existing law.

“Congress has effected a delicate balance between ATF’s regulation of firearms and the right to privacy held by lawful firearms owners,” Collyer wrote in a 21-page ruling. The ATF’s reporting requirement “did not disturb that balance.”

The NSSF obviously disagrees with this ruling, hence the file for appeal last week.

“The decision places our industry on a ‘slippery slope,’” said Lawrence G. Keane, NSSF senior vice president and general counsel. “The district court’s ruling will allow the ATF to demand whatever information it wants from any law-abiding retailer anywhere in the country for any reason ATF wants simply by sending a letter demanding information.”

“Though NSSF understands ATF’s motivation is to try to curtail violence in Mexico, Congress simply has not granted ATF regulatory carte blanche,” he added. 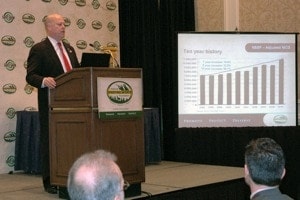 Keane also stressed how cooperative the firearm industry has been with law enforcement over the years, implying that this mandate is, indeed, unnecessary.

“Notwithstanding our appeal, NSSF is continuing to encourage all retailers — not just those along the border — to cooperate with law enforcement and report any suspicious activity to the ATF,” said Keane.

“Members of the firearms industry take great pride in their longstanding cooperative relationship with ATF,” he continued.  “Retailers have long been considered by ATF to be a vital source of information for law enforcement in combating illegal firearms trafficking.”

The file for appeal is the first step toward having the U.S. Court of Appeals for the District of Columbia Circuit hear the case.

As always, Guns.com will keep you posted on the progress of this appeal.