When discharged underwater, a standard 9mm pistol has a lethal distance of under one yard (depending on the depth of the water) and, knowing gun people (and we’d like to think we do), a wee limitation like this to man’s ability to shoot a gun, simply would not stand. Enter names like the SPP-11 or the HK P-11 and no, they’re not a spear guns. These hush-hush handguns are true underwater firearms—percussion weapons specifically designed to fire deadly projectiles and take out opponents while submerged under water.

The major challenges in the production of a viable underwater weapon was how to engineer a projectile that a) could be fired accurately without water pressure having a significant influence on the path of the “bullet” and b) would retain its stopping power in deeper water.  In a substance that is around 784 times denser than air, typically shaped rounds that take up the entire barrel present too much faceted surface area to “cut” through the liquid and create a huge build up of pressure in the barrel.

Consequently, the projectile’s energy is quickly dispersed; pressure has “no direction” meaning, under the chaotic conditions of a higher pressure environment, the bullet’s trajectory is likely if not guaranteed to be compromised. The deeper beneath the surface, the shorter the range of any projectile due to increased water pressure and one’s ability to aim quickly becomes so inexact it renders the weapon impotent.

Darts made of high density materials like steel and that practically extend the length of barrel,  rather than bullets, are the logical solution. For multiple shots, most underwater guns makes use of a pepperbox design, with a dart loaded in each barrel, though not all of them like the…

A double action only pepper-box weapon, the US government started toying around with MK 1 during the 1960s era Cold War as part of a project called TDP 3801. The frame, action, door assembly and cylinder were all stamped out of aluminum while the barrel and all other parts were machined out of stainless steel. The trigger was made of nylon and provided lubrication underwater.  A departure from traditional firearms, when the firing pin strikes the primer, propellant, contained in a chamber below the firing assembly ignites, firing the dart from the cylinder.

At the outset, the government envisioned a rocket type weapon, though explosives proved too costly and the lab coats were forced to direct their attention to simple projectiles and sheer ballistic force.  The Mark 59, a stainless steel cylinder containing a four-inch tungsten dart, became the guns signature round.  Shooters fit these cylinder magazines through an entry point on the left side of the gun with each gun taking six rounds.

The MK 1 actually worked as advertised though Naval operators never really warmed up to its bulky design or its status as a signature controlled item (meaning you hand to sign it out), which is rumored to have also contributed to its relative obscurity. 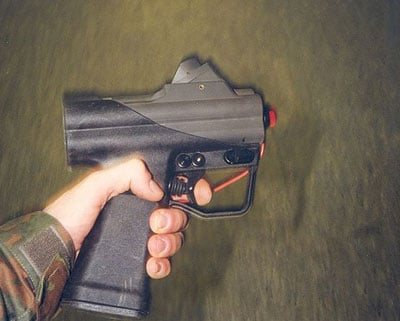 This cartridge fires from what can best be described as a big five barreled pepperbox configuration revolver.  There are two batteries (nine volt) encased in the pistol grip for ignition.  The gun discharges all five of its barrels individually, but when these are done, the barrel unit must be sent back to its manufacturer—pretty much the kiss of death for any hopes of a commercial market.

Slimmer and easier to operate than its American predecessor, the HK P-11 is currently in service with the Navies of Norway, Germany, Italy, France, UK and the USA and was originally designed for combat divers (i.e. Frogmen) who are often some of the most highly trained and cover operators on the planet. Because of this, there is very little known about this gun except to military personnel.  It is certainly not in the Heckler & Koch product catalog.

In spite of the Heckler & Koch brand name, the SPP-1 Underwater Pistol appears to be the most broadly accepted underwater handgun out there. 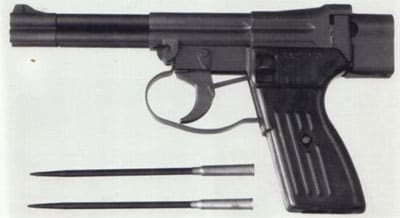 The SPP-1 was another Cold War development (only by the other guys) invented sometime in 1969 or 1970 by Vladimir Simonov and approved for use by Frogmen (Боевой плавец) in 1971.  However by 1989, with the disintegration of the Soviet Empire, possession, parts and tooling reverted to the Russian Navy who in turn sold and disseminated SPP-1’s to whoever would take them through manufacturer TOZ (Tulsky Oruzheiny Savod- Тульский Оружейный Завод) and Russia’s state military export/import agency RosOboronExport.  Over the years, the only modifications made to Simonov’s original design have been a larger trigger guard to accommodate dive gloves and an improved sear.

The weapon fires a 4.5mm caliber steel dart weighing 1.5 ounces from a cartridge that is 5.7-inches long and weighs in at 0.62 ounces and is without rival the most deadly underwater small arm out there.  It has dramatically more penetrating power and a longer range than a “spear gun” (and at a fraction of the size) and leaves the other two underwater pistols in the weeds in terms of ballistic performance. With four barrels and the ability to quickly reload, the SPP-1 became the perfect ambush weapon for security divers guarding warships or subs in harbor.

The gun uses a break action similar to an over/under shotgun for reloads with the breach fitting a flat steel clip of four rounds.  The SPP-1s barrels do not have rifling but depend on hydrodynamics to keep darts on target under water.  On the surface it is notoriously imprecise (one benefit the HK and the MK 1 have over this gun).  The special, watertight proprietary ammunition (designed by Pyotr Sazonov and Oleg Kravchenko) is exclusively in rimmed bottlenecked cartridges and is only 1.6 inches.

The Russian win.  This time.