Training for Nam: Live-fire Drills on the Wide Open Sea

Like a whole bunch of guys my age, 1966 through to 1972 entailed several trips west over the Pacific Ocean to a land called Vietnam.  One of those trips for me actually wasn’t on board a charter flight (usually ending up in either the Philippines or in Thailand), but rather aboard the Essex class aircraft carrier the U.S.S. Bon Homme Richard, CV-31, which sailed out of San Diego, California.

And what did we do on the ocean during the time it took to get from California to Asia?  We trained.

I owe my apathetic feelings towards cruise ships to that two-week jaunt.  Onboard, my bed was a canvas-covered bunk under the starboard wing of a Grumman A-6 Intruder bomber situated in the enormous hangar deck beneath the flight deck. The noise beneath the flight deck was indescribably loud. Jets and whatever else was stored there came in and went out at all hours of the day and night, pretty much non-stop. The Navy guys had it much worse, hot-bunking for just a few short hours of shut-eye between long shifts. 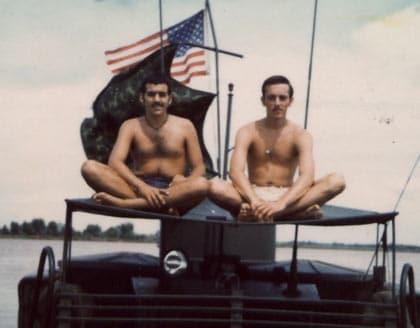 I can’t complain about the food though; it was not only available all day, it was always superb.

I wasn’t even a part of the Navy, more or less along for the ride, and I soon realized I shared these circumstances with eight other companion travelers.  My first impression of these guys was that they all seemed insane.  Their orders were theirs and theirs alone and talk was kept to a minimum.  I assumed most worked for some strange branch of the State Department like me or were right out of the CIA’s Langley, Virginia nerds-to-Neanderthals school. 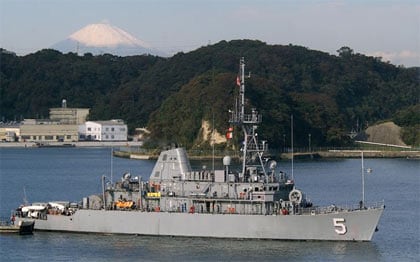 You might ask what in the world did eight people do on that ship? And I’ve often wondered about that myself, but it boiled down to this: for the two weeks, almost around the clock, we spent practicing live-fire drills out the side of whatever open airplane elevator was available to us.

In my possession I had the special-built McMillan .338 sniper rifle that had been issued to me the year before (pursuant to my training as a sniper), but the other operators carried a very eclectic assortment of gear.

One of the guys carried an Israeli R4 Galil, while two more carried very early versions of Heckler and Koch’s great HK-53. There were six early models of MP-5s laying around which we all used from time to time, a couple of Browning short-barreled automatic shotguns, and there was one German MG3 machine gun in 7.62mm caliber. 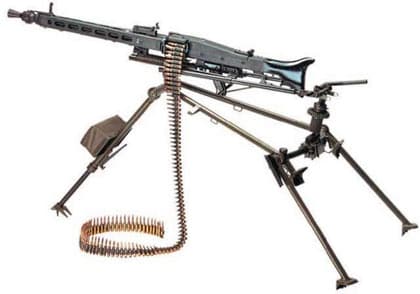 We didn’t (at least I didn’t) have a clue what assignments we were being sent on, but we all knew pretty quickly why the government saw fit to send us on a two-week tour via aircraft carrier rather than fly us to the war arena directly. The idle time was designed to do just one thing: force us to practice day and night.  If we were ever going to be an effective team, our operational cohesion was of paramount importance, and “trapping” us on an aircraft carrier to run drills endlessly was Uncle Sam’s way of ensuring that this happened.  I fired more rounds out into the waters of the Pacific Ocean during that time then I had fired anywhere at any other time in my life.

On the seventh day out at sea, we were called into the Captain’s quarters for a meeting, and told that the next day all the ships in his fleet would come to a full stop. For the several hours we wouldn’t be moving, we were to practice hitting floating targets the Navy boys would be setting adrift.

Where the captain’s orders came from we did not know, nor did we ask, but right on time the following day the carrier came to a full stop, and the remaining ships of the small fleet moved away from the starboard side of the carrier. Believe it or not, the sensation of moving for one week then watching the ship your on plus all the other ships around you stop practically in unison in the open ocean was one of the strangest things I have ever experienced in my entire life. 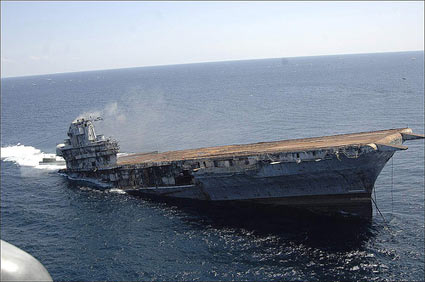 By the time the ships set sail again I’m guessing we had gone through several thousand rounds of ammunition, and we had a whole bunch of Navy guys sitting around behind us observing. My left shoulder and the left side of my neck, as well as the bicep of my left arm was nothing but black and blue by the time we docked in Subic Bay in the Philippines.  Now a veteran of that conflict I can tell you it was all well worth it.

Four days later we were on two UH-1B helicopters heading up into the northern reaches of Laos, and nearly ten days following that little exercise I was back home for Christmas. Unbeknownst to me, dad’s 1911 pistol had been cleaned, boxed and wrapped, and was tied with a bright red bow. It sat waiting under the tree. That was the way it was back then, nuggets of pure insanity that thankfully ended with the bliss of Christmas and family.