Why Are Gun Permits Soaring in Illinois?

Gun ownership is on the rise in Illinois.  Don’t take my word for it, just look at the numbers.

According to Monique Bond, a spokeswoman for the Illinois State Police, the number of people who have valid FOID cards has increased by more than 78,500 since last year (note, FOID cards are Firearm Owners Identification cards that permit one to purchase firearms and ammo, they are not CCW permits).

“As of Jan. 1, 2011, there were nearly 1.4 million FOID card holders statewide, compared to more than 1.3 million a year earlier,” Bond told local reporters. “That’s an increase of more than 6 percent.”

How does one explain the overall uptick in gun ownership in the Land of Lincoln? 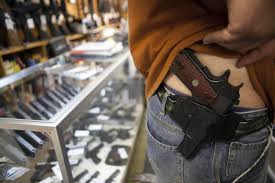 To start with the most obvious factor, in 2010 the U.S. Supreme Court ruled that Chicago’s 28-year old ban on handguns was unconstitutional in the McDonald v. Chicago case (which was an extension of the 2008 Heller v. D.C. decision).  This forced the Chicago City Council to pass an ordinance lifting the ban in July 2010.

Following the removal of the ban, the numbers of FOID cards in Chicago rose by 16 percent.

Another factor that likely led to the surge is the desire for Illinoisans to pass legislation legalizing concealed carry.  Currently, Illinois is the only state in the union that outright bans concealed carry.

State Rep. Brandon Phelps (D-Harrisburg) argued that watching Wisconsin lawmakers legalize concealed carry (the 49th state to do so) served to whet the appetite of Illinoisans, hence the increase in FOID cards.

“That may have gotten people thinking Illinois will be next,” Phelps said.

Phelps sponsored a CCW bill last May, but it fell six votes short of the 71 required for passage in the Illinois House.  Even if it passed, Gov. Pat Quinn vowed he would veto the measure.

Nevertheless, optimism abounds, hope springs eternal for a day in which Illinoisans will have CCW rights. Feeding into this hope, many have argued, is a bevy of lawsuits at the state and federal level that are aiming to bring Illinois gun laws in line with other states.

A third factor to explain the increase in FOID cards is self-defense. Many argue that economic instability has led people to feel more exposed to violence.

“I think you’re seeing a lot of people that are more or less breaking into places, and I think people just want to be able to protect themselves and their families,” Phelps said.

Still there are other contributing factors in addition to loosened gun laws, CCW politics and self-defense.

Todd Vandermyde, a legislative liaison for the National Rifle Association, cited two more reasons, “more women are getting guns and more people believe the Obama administration will make it harder to get weapons in the future.”

But the truth is, and as Vandermyde admitted, “You can’t put it on any one issue.”