Here are the results of their 2011 online survey:

Around the country, 46 percent of respondents called for stricter firearms laws, with the highest level of support from Democrats (62%), Independents (51%) and Americans who do not possess a firearm (55%). Conversely, Republicans and gun owners would prefer to have either looser regulations or the continuation of existing ones, the pollsters found.

For the issue of concealed carry, the pollsters made the following disclaimer, “Where states have enacted different regulations, half of respondents (51%) support the ‘shall-issue’ notion of allowing citizens to carry a concealed weapon if they meet specific criteria laid out in the law.”

Moreover, the researchers noted that this “prerogative is endorsed by a majority of Republicans (60%), Independents (53%) and gun owners (60%), as well as a plurality of Democrats (44%) and Americans who do not possess a firearm.”

According to the findings, “seven-in-ten Americans hold no reservations about people who are eligible to own firearms having access to handguns (73%) and rifles or shotguns (72%).”

However, only three-in-ten respondents (30%) feel the same way about semi-automatic weapons, with a majority (61%) suggested that only the police and other authorized persons should have access to them. 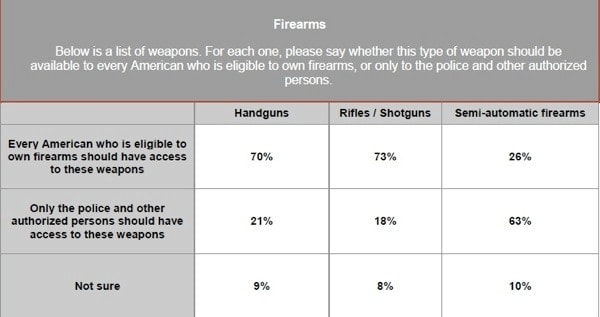 The researchers analyzed their findings and came to the following conclusions:

The views of Americans on the Second Amendment have not gone through any significant fluctuations over the past two years. Democrats continue to call for stricter firearms regulations, while Republicans are mostly satisfied with the status quo.

Since January 2011, there has been a four-point increase in the proportion of Americans who endorse “shall-issue” jurisdiction to deal with concealed carry. These guidelines are now in place, albeit with different overall requirements, in three of every four American states.

From January 17 to January 18, 2012, Angus Reid Public Opinion conducted an online survey among 1,009 American adults who are Springboard America panelists. The margin of error—which measures sampling variability—is +/- 3.1%. The results have been statistically weighted according to the most current education, age, gender and region Census data to ensure a sample representative of the entire adult population of the United States. Discrepancies in or between totals are due to rounding.

The researchers who conducted the survey didn’t (at least to my knowledge) explicitly acknowledge the limitations of their poll.  So, here are a few things to consider when viewing the results.

First, the researches mention the opinion of gun owners in their finding, e.g. “gun owners (54%) are more likely to say they are satisfied with the status quo,” but do represent them as a subgroup in their graphs.  Moreover, in the actual study itself, they did not delve into the opinions of gun owners on those gun-related topics in any depth.  They only mentioned them in passing.  This is a curious oversight.

Second, both firearm regulation questions are vague.  Instead of asking about a specific federal or state regulation, e.g. multiple purchases tracking requirement, the survey makes generic inquires: satisfied/dissatisfied, more strict/less strict.  These questions should have been tailored to specific laws and regulations to get more precise answers.

Third, it’s an Internet survey.  Without going into too much detail, there’s an ongoing debate about the reliability of Internet polls.

In any event, some things to think about when reviewing the results.