The Squad Leader’s Gun: The M249 SAW and its Variants

Our tactics have evolved and new technologies have been employed but, when you boil it all down, the role of any soldier who leads men and women onto a field of battle remains the same: to support and ensure the success of the infantry.

In this role, US squad leaders since 1989 have fielded the M249 Squad Automatic Weapon (SAW, though now officially the M249 “light machine gun”), an individually portable, lightweight automatic weapon that is capable of delivering withering amounts of firepower but with rifle-like accuracy.

With a design imported directly from the FN Minimi, the M249 is a gas-operated, air-cooled system that can spit bullets anywhere from 750 rounds of 5.56 x 45mm NATO per minute all the way up to an impressive 1,000 rounds per minute from an open bolt.

Built with both gun weight and maneuverability of the operator in mind, the weapon can be fired from all the standard rifle positions such as from the shoulder, prone with its bipod support, the hip or even from the underarm position—a distinct advantage over the gun’s clumsier predecessors like the BAR and more conducive to the activities of a squad leader. The gun can also take a tripod for use from a fully automatic machine gunner’s position.

The normal method of feeding ammunition into the SAW is with a 200-round disintegrating belt, but it is also fully capable of using our standard M-16 magazines. The well for that magazine is underneath the gun, reinforcing the guns dual role as both a primary sidearm and a fixed position weapon. 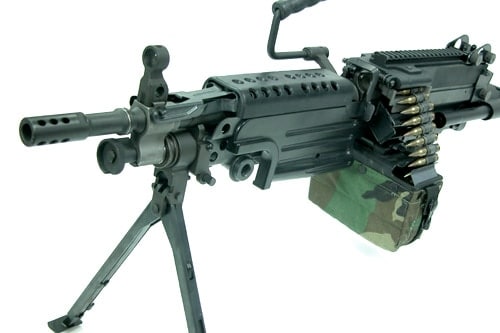 Sound leadership comes in many forms so it would seem appropriate that M249s come in many shades and variants. The M249 PIP is the M249 “smoothed out” with certain edges beveled or machined out.  This variant also took a bite out of the weapon’s cumulative recoil by swapping out the steel tube stalk for a plastic one and tacking on a hydraulic buffer to disperse blowback energy.  These changes also prohibited the weapon from higher rates of cyclic fire.

Most of the variants though emphasize the guns hybrid existence as both a combat rifle and a light machine gun. The M249 Para is a compact version and was intended for use on board cramped planes and helicopters. The M249 Special Purpose Weapon (SPW) follows a similar path as the Para but does away with even more furniture—namely the magazine insertion well, carrying handle, and vehicle mounting lug—in order to cut down on the weight of the system.

The desire of the platform to become more of an all-in-one infantry weapon becomes even clearer in the Mark 46 General Purpose Machine Gun or GPMG. Like the M249 it fires the NATO 5.56 x 45mm rounds but unlike it’s beefier parent (18 pounds compared to the M249’s 22 pounds) the Mark 46 fire both the lighter barrel of the SPW and a thicker, fluted barrel.  Many people believe this makes the MK 46 as effective as the tried and true M249.  It’s not unusual anymore to find both weapons being fielded and used in the same combat environment today.

Finally the MK 48 promises to bring the Mk 46 into 7.62 x 51mm NATO territory. Leaders in the United States Special Operations Command’s special forces as well as our U.S. Navy SEALS and the U.S. Army’s Delta Force use all three of these weapons—the M249, the MK46 and the MK 48—to this day.

A new ones cost the government about $4,000 though civilian sales get notoriously expensive quickly.  Pre-1986 examples can fetch $75,000.