Laser-Guided Bullets: Sub-MOA at Over a Mile

Two Sandia National Labs researchers have done something that’s just mind-blowing, in every sense of the word.  Red Jones and Brian Kast have developed a laser-guided bullet with a range of over a mile.  Well it is the 21st century, after all.

Point in case: the laser-guided bullet is designed by Sandia, a subsidiary of Lockheed Martin Corporation, for the U.S. Department of Energy’s National Nuclear Security Administration.  Nuclear laser bullet from the future!  But seriously, this is for real, and is just astonishing.

The bullet is flanged with four fins for straight flight, like a dart, which are encased in a plastic sabot that falls off as soon as the bullet leaves its smooth-bore barrel.  The bullet has internal electromagnetic actuators that correct its flight; it doesn’t need to spin, it stabilizes itself.  “The natural body frequency of this bullet is about 30 hertz, so we can make corrections 30 times per second. That means we can overcorrect, so we don’t have to be as precise each time,” Jones said.

Their prototypes are made with commercially-available parts, too, so while this is still very early in development, real production isn’t going to be a huge issue (provided the next volley performs as well as these first rounds did).  It also works fine with commercial gunpowder and leaves the barrel at 2,400 FPS.  They hope to work on the charge and get it going faster, too, presumably to increase its effective range beyond 2,000 meters.

This is a time-lapse photo of their prototype fired downrange.  The bullet was fitted with an LED to make it track on camera: 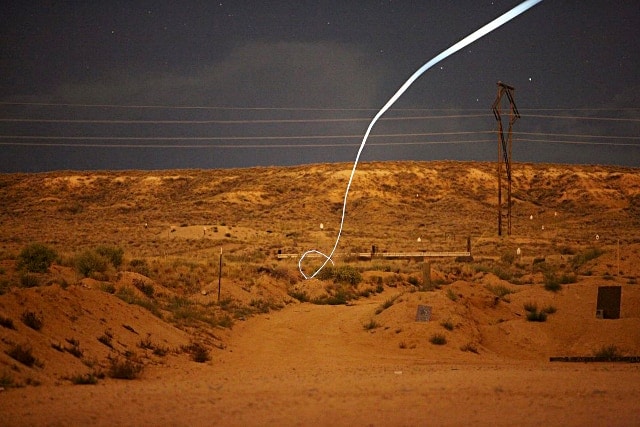 Unlike laser-guided missiles, the simple design and small size of the projectile doesn’t need an inertial measurement unit, which makes them a lot more cost-effective to produce, and still totally capable of ruining someone’s day. 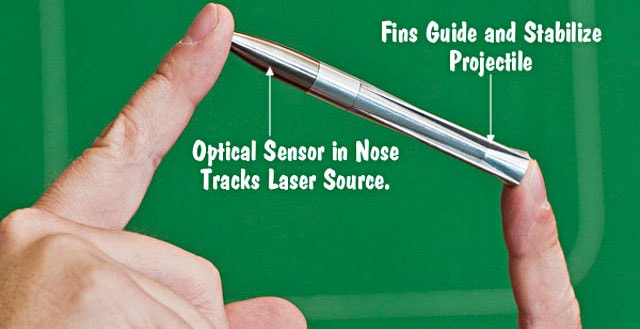 Right now, they plan on developing them for the military and law enforcement (who would have guessed, right?) but surprisingly, they also want to cater to shooting enthusiasts.  That’s correct, you too may one day own your own laser-guided plinker.

We’re pretty sure snipers won’t be out of a job for a long time to come, though.

Someone’s going to have to hold that laser pointer steady, heh.