Should Authorized Pilots Be Able to Carry a Gun Outside the Cockpit?

Approximately one in 10 of the nation’s airline pilots are authorized to carry a concealed handgun while flying, according to a Transportation Security Administration projection.

While many agree that having armed pilots helps to ensure the safety of passengers during flights, pilots argue more can be done to maximize safety.

That is, now pilots are petitioning to have their carry privileges extended beyond the cockpit.  Ideally, what they want is police-like authority to holster a firearm wherever they might be (in the terminal, as a passenger on another flight, etc.), not just when they are behind the wheel of a 747.

“That would put us in line with standard law enforcement,” Marcus Flagg, president of the Federal Flight Deck Officer Association, which represents thousands of armed pilots, told the Montreal Gazette.

While the exact number of pilots authorized to carry is not known, Flagg said it falls just behind the FBI, which has approximately 13,800 armed agents. 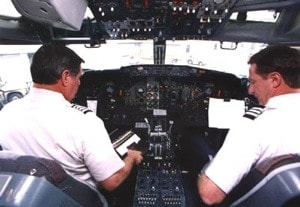 In order for a pilot to be authorized to carry, he/she must endure six day of intense training at a federal center in Artesia, N.M.  While there, they learn how to shoot and how to handle weapons in close-quarters.

Yet despite the professional training, the TSA is reluctant to loosen its tight restrictions on where and when and for how long pilots can carry.

Flagg believes that these restrictions are discouraging pilots from joining the Federal Flight Deck Officer program.  In November, he testified before Congress and argued that if pilots were given more latitude with respect to carrying a sidearm, registration in the program would double.

“The more Federal Flight Deck Officers that are out there, the more flights that are covered,” he said. “They should not be restrained by the government from defending the cockpit in the event of a terrorist attack regardless of the side of the cockpit door they are seated.”

“Interest in the program and participation both remain strong,” Kimberly Thompson, spokeswoman for the Federal Air Marshal Service, which trains armed pilots, told the Montreal Gazette. “There are no shortages of applicants.” 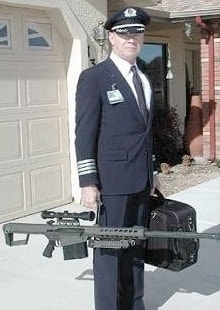 And there appears to be some truth to Ms. Thompson’s statement.  Armed pilots are the fourth largest U.S. law enforcement organization behind the FBI, according to the Federal Flight Deck Officer Association.

Ultimately though, arming pilots may prove to be the most economical way of keeping the airways safe.

According to Flagg, the cost of putting a federal air marshal on a flight is about $3,300 next to the cost of arming a pilot which is about $15.

“This is the most cost-effective security measure,” said Flagg.

So far, no armed pilot has had to use his weapon to deter or prevent a situation from escalating.  However, there has been one case of accidental discharge when a pilot’s gun fired while he was stowing it.  No one was injured in the 2008 incident and the plane landed safely.

Pilots were given authorization to carry while flying in 2002, a year after the Sept. 11 terrorist attacks.