The McMillan TAC 50 .50 Caliber Sniper Rifle: Consistently Hitting the Mark Since the 1980s

Human beings are pretty easily blinded by pizzazz.  We tend to gravitate towards words like fastest, strongest and most powerful, because these are all qualities we’ve been conditioned to associate with success, while more meaningful labels like reliable and consistent rarely get as much attention.  And that’s a real shame, particularly in the world of practical shooting, where a gun is really valued less for its maximum capabilities and more for its dependability when called upon to save and/or take a life.

As a for instance, take the TAC 50 .50 caliber sniper rifle, a weapon that has proven it performs consistently when and where it counts—in the field.

It may not be a record holder like the Accuracy International AWSM or quick shooting semi-automatic like a Barrett M107, but with untold confirmed kills to its credit and a variety of the world’s top marksmen choosing to take position behind its trigger, it’s pretty clear the TAC 50’s  glowing performance record is due to more than just the soldiers who fire it—and it all starts with the barrel.

What’s in a Barrel? 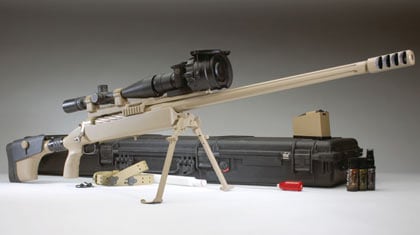 The TAC 50 is produced and assembled in Phoenix by the McMillan Brothers Rifle Company, a proudly American organization, who has built up since 1973 a solid reputation for designing .50 caliber ‘bench rest accurate’ rifles that can send a round down range beyond the golden mile and a half mark. The voodoo behind hurling a projectile accurately at this distance is a mix of ammunition and barrel science, and when it comes to the latter, it’s often wise to look outside the company for a specialist.  Accordingly, all TAC 50 free-floating barrels are custom made by Lilja Precision Rifle Barrels Inc. a family owned business that operates in Montana.

Coming from a competitive benchrest shooting background, founder Dan Lilja has been making award winning rifle barrels since 1985 and his outfits partnership with McMillan makes sense: McMillan also traces its roots to competitive benchrest shooting and before they made rifles the infant company made stocks and other component parts for such events.

Rifle barrel material is quality 416 type stainless or 4140 chrome-moly steel, all manufactured in the U.S.A.  To quote Dan Lilja, “We do not have different grades of barrels in the two types of steel: just one, our best heavy match quality and that is what goes into the TAC-50.  All of the tooling is made in house or supplied exclusively from U.S. suppliers.”

Easily the most important part of a rifle to accuracy and distance, the Tac 50’s barrel is something of a Swiss watch in terms of sophistication. For example, the company guarantees their stainless steel barrels are uniform dimensionally to an insanely precise .0001 inches and that they are free from internal tool marks courtesy of a final handlapping process.  Heavy fluting cuts weight significantly and enhances air cooling yet paradoxically doesn’t compromise barrel and bolt rigidity in the final product. Lilja barrels are CNC milled with pull-button rifling which produces a very uniform twist rate essential in precision rifles. Every barrel is stress-relieved in a vacuum furnace and inspected with a video bore scope making it no small wonder every major ammunition manufacturer out there uses Lilja barrels to authenticate accuracy as well as perform pressure tests on their products. 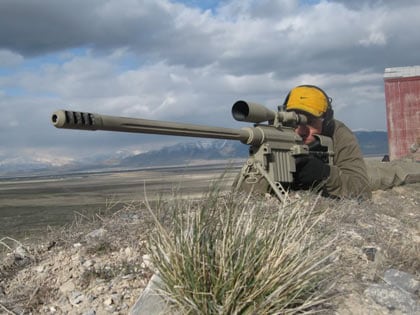 Aside from the shooter, a rifle’s barrel enacts perhaps the greatest influence on the path of a bullet, but that doesn’t mean much if the round doesn’t have enough gas to get it to the target so, like many of its long-distance competitors, McMillan rifles are uniformly chambered in .50 BMG.

Though the .50 BMG caliber traces its origins all the way back to 1910, the ammunition commonly used in TAC 50s is the result of innovations throughout the 1990s. These TAC 50 .50 BMG cartridges come in two varieties and both are covered with cupronickel, a thin layer of copper alloy that protects the softer core and permits the bullet to remain intact until impact. The anti-personnel round is lead core and the anti-material round uses exploding or incendiary projectiles for punching holes in equipment or people, detonating upon hitting a hard surface, be it bone or metal.

The cartridge uses a high velocity boat tail bullet, with a streamlined base that permits a lower drag coefficient and flattens the trajectory. This in turn facilitates longer range shots with much higher kinetic energy upon target impact. Enhanced internal ballistics further defines the coupling of the ammunition and the seal of the bullet to maximize the burn of the propellant. 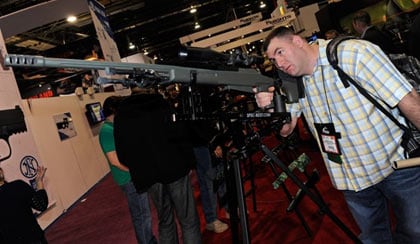 The TAC 50 initially had one hell of a kick so a proprietary muzzle brake was engineered to subdue the hefty .50 caliber recoil as well as check muzzle lift. They are now much softer to shoot.

For 2012, the Tac-50 A1-R2 variant promises to mitigate recoil even further with a hydraulic recoil mitigation system in the buttstock. The Tac-50 A1, also new for 2012, features a take-down fiberglass stock and rearranges some features (i.e. the magazine release) for easier operation with gloves.  On all models black rail and rings secure either Leupold or Ziess optics and the stock is adjustable with a spacer system to permit you to customize the length of pull required. The trigger is custom set at a 3 pound pull, the standard for professional end users, but easily adjusted by an armourer or gunsmith. 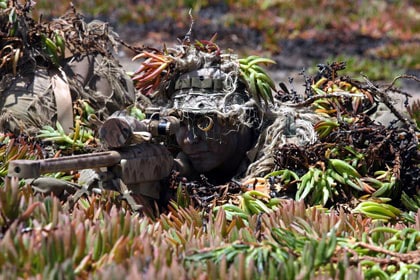 In March 2002 south of Kabul, Cpl. Rob Furlong made, what the time was, the longest confirmed kill ever at 2,430 meters or 1.509 miles.  Furlong was shooting an American made TAC 50.  Additionally, a pair of sniper teams of three soldiers a piece were equipped with TAC 50s and accounted for 20 Taliban kills in Operation Anaconda, a combined forces action in Afghanistan. All six were nominated for the United States Armed Forces Bronze Star Medal, despite the fact that the sniper teams were Canadian.