Fighting the Flinch: Mastering Recoil in a Handgun

The other day I was at a gun shop (kind of like a second home for me) when I overheard a younger gentleman inquiring about a .44 Magnum and, almost as if on cue, I heard someone else parrot the old saying, “it kicks like a mule”. Personally, I have never been kicked by a mule nor would I like to, but I have shot many .44 Magnums in my day and I found most to be fairly agreeable in the recoil department.

Yet the other eavesdropper’s comments are evidence of (and possibly even the root of) a much larger problem in the world of handgun shooting—the flinch a.k.a. accuracy’s nemesis.

Whether you know it as the yips, twitches, staggers, jitters or jerks, in shooting the flinch is when the shooter—for whatever reason—twitches slightly just before the trigger is pulled, throwing off the accuracy of the shot.

While that ever so slight twitch may not even be that evident from the shooter’s standpoint, on the far end, these momentary spasms can affect the shot by inches or feet and fighting that flinch is one of the best ways to become more accurate with your handgun. 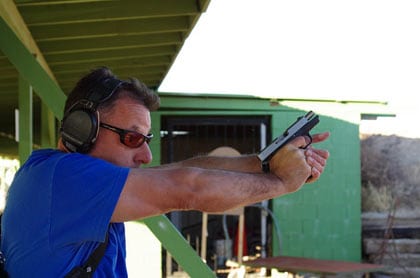 Enlisting a skilled instructor is a great way to address and eliminate your flinch simply because often, shooters don’t even realize they’re flinching when they shoot. Any real pistol instructor, especially one who is NRA certified, will know how to identify and address flinching as it is a common problem.  No mystery here, just bring someone along to your practice sessions that knows how to shoot and that you’re comfortable taking advice from.

I had to help a relative of mine overcome a flinch when he first started shooting guns larger than a Red Ryder.  I can usually tell if the shooter is nervous (common with new shooters), and what I do is actually load the gun for them and then hand it to them to shoot rather than make them navigate the gun themselves. This helps them feel at ease about the process but I also do this for tutorial purposes.

After allowing the student to shoot a couple of loads, I will hand them an unloaded gun and watch their anticipation level as they pull the trigger. Of even more educational value, this usually give the shooter firsthand verification that they’re flinching.

If I’m teaching a student with a revolver I will load a live round, skip a chamber or put in a dummy round and then load the next and perhaps even the next.  The point is to randomize it so the shooter does not know which chambers are live (and must assume they all are) or you can just use a set pattern of live-empty-live-empty.  Alternating like this will force a shooter to see what they are doing wrong when they pull the trigger. 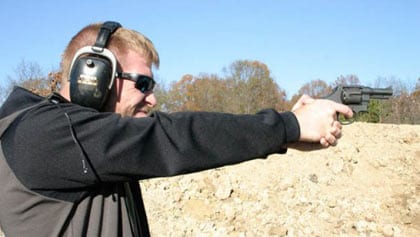 One of the biggest problems I see with new and veteran handgun shooters, especially those fielding larger, louder calibers like the .357 Magnum, is that before they even touch the trigger, they already have it in their heads the gun is going to hurt them. These mental preconception of firearm performance can easily develop into a serious flinch (and I think old chestnuts like ‘kicks like a mule’ are very much to blame for this).

The immediate solution should be obvious: if you want not shooters to not develop a flinch, don’t start them out with guns that kick.  If the shooter is just starting to shoot handguns, don’t give them a .357 Magnum or .44 Magnum right off the bat.

Ideally, new shooters should start with a handgun in .22 Long Rifle, but if the only gun they have is in .357 magnum, light .38 Specials also fit the bill. Good ear protection is essential too; nothing turns off a new shooter like the full blast of a magnum revolver.

In pistols, stay away from the .45 ACP the first time out and even a 9mm may jolt the more skittish first time shooters.  For first timers, use a .380 instead, or, again, a decent little .22 pistol would be the best.

Shoot your Flinch Away 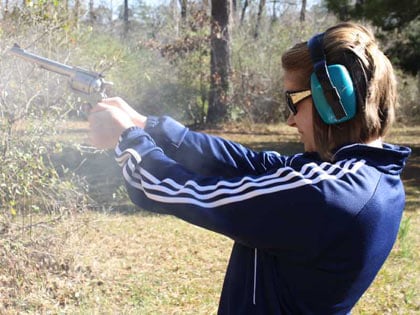 Unfortunately (or fortunately for many) the only way modern man knows to ever truly work out someone’s flinch when shooting a handgun is for the shooter to shoot handguns a lot.  The more your body and mind experience the reality of shooting your gun, the better prepared these facilities will be to handle the stress but this is only if you take measures when you shoot to acknowledge and correct any pre-shot movements.  Eventually your body will inherently understand the recoil of the gun and firing it will become second nature.  The beginning and end?  Practice, practice, practice.

As an instructor, your role should be to provide positive encouragement during these sessions to keep your students practicing. Poor instructors shoot more than their pupils or try to show up their shooters by “out shooting” them.  Trust me, in shooting just as in everything in life that’s taught, this will only make your student feel belittled and, usually they will find another way to spend their time.

Instead of showing them what a rock-steady aim you are, explain to them that you didn’t start off that way and that with time and practice they can get better. I personally have been amazed at how fast some pretty lousy shots turn into darn good ones with only a positive instructor and some quality trigger time at the range.

If you only take away two things from this article it should be these: one, shooting a handgun does take time and two, every shooter, no matter if they are a range virgin or a three-gun champion, at one time or another has fallen victim to the flinch.  We just had (or have to) to learn to shoot it out.