In the tradition of A Modest Proposal, five South Dakota lawmakers are pushing for a piece of legislation that would require all citizens, 21 and older, to purchase a firearm for self-defense.

The bill has three sections: they are:

Section 1. Not later than January 1, 2012, each citizen residing in the state of South Dakota who has attained the age of twenty-one years shall purchase or otherwise acquire a firearm suitable to their temperament, physical capacity, and personal preference sufficient to provide for their ordinary self-defense.

Section 2. After January 1, 2012, each citizen residing in the state of South Dakota shall comply with the provisions of this Act within six months of attaining the age of twenty-one years.

Well, when Rep. Hal Wick (R-Sioux Falls), one of the sponsors of the bill, was asked about the true intent of H.B. 1237 he fessed up to its facetious nature but also underscored the larger political point the sponsors were making.

“Do I or the other cosponsors believe that the State of South Dakota can require citizens to buy firearms? Of course not. But at the same time, we do not believe the federal government can order every citizen to buy health insurance,” he said. 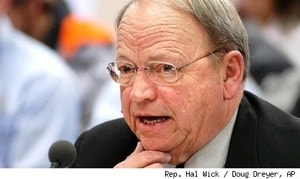 He is, of course, referring to the federal individual mandate to buy health insurance included under the “Affordable Care Act,” or as its known colloquially, “Obamacare.”

Critics of the bill panned it as a pointless political stunt and/or a waste of time.

Doug Mataconis questioned the merits of the criticism the bill was placing on Obamacare.

He wrote in Outside the Beltway, “there isn’t any reason why a state government couldn’t require gun ownership — although I happen to think it would be an ill-advised policy — and as Massachusetts shows us, it can also require people to purchase health insurance.”

“Whether the Federal Government can do that last one is the issue presently before more than one Court. This little bill doesn’t prove anything and just makes its advocates look silly.”

If these lawmakers want to look less silly, they should sponsor a real bill that subsidizes the purchase of all firearms.  Give each gun owner or prospective gun owner government funds to purchase the gun of his/her choice.

What do you guys think?