What do the Komen Foundation and the infamous Walther P22 Hope Edition pink pistol have in common?

Nothing–well, nothing, substantial at least.

In a mix of imprudent decisions, faulty claims and emotional reactions, the two have been tied together in an effort to further criticize the nation’s leading breast cancer advocacy group.

Earlier this week the Susan G. Komen Foundation decided to stop granting funds to Planned Parenthood, a national sexual and reproductive health care provider. They stopped because Planned Parenthood is under investigation. Period.

The foundation added, the reason Planned Parenthood is being investigated by congress (for allegedly using federal funds for abortion) had nothing to do with it.

Either way many of Komen Foundation supporters, partners and friends were outraged by the initial choice. The foundation responded to the bad publicity by reversing its decision, apologizing and continuing to grant money to the health care provider.

But since the organization’s board of directors made the ill-advised decision, the foundation has been dragged through the mud. 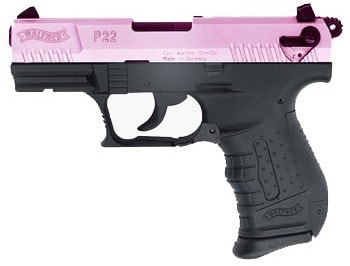 Yesterday they were criticized for partnering up with gun manufacturer Smith & Wesson to make the “Walther P22 Hope Edition,” a P22 with a pink slide, to raise money and awareness for breast cancer. Kind of a you’ll choose guns over breast cancer screenings–you don’t really love me.

Too bad for the accusers because it isn’t true. Neither the Komen Foundation or S&W had anything to do with the Hope Edition pistol.

It was all done by a Seattle-based company called Discount Gun Sales. The company was actually buying the P22s, coloring the slides and then selling them on behalf of the foundation. But the issue seems to be moot. According to a spokesman for Discount Gun Sales, they stopped selling the Hope Edition two years ago.

On top of that, the Komen Foundation released a statement to HuffPost saying they had nothing to do with Discount Gun Sales and that it was a rogue scheme.

“They are not our partner, and we have never received any donations from them,” the foundation said via Twitter.

And a S&W spokesman said they had no knowledge about Discount Gun Sales’ actions either.

Unfortunately, media outlets ranging from left-wing bloggers to even gun news websites chose sides and made claims based on the speculative information.

In support of the foundation’s statement, here is the ad for the pistol as it looked in 2010 (the actual ad has been removed from the seller’s website).

Notice how they misspelled Komen’s name on the first reference. Sort of reinforces the foundation’s statement.

Here is a list of the foundation’s official partners.

Oddly enough, there’s actually a more credible claim by S&W, a public company, that connects them with the foundation. In 2009, the company said in a press release:

Smith & Wesson … has made its first quarterly donation to the Massachusetts Affiliation of Susan G. Komen for the Cure organization through proceeds collected from the sale of the M&P9 JG pistol. The funds donated will benefit breast cancer research, education, screening and treatment.

This was the only official document found that includes both Komen and S&W, meaning it is unknown if S&W made more than one donation. Guns.com contacted the Komen Foundation to confirm the transaction, but received no response.

However, in the foundation’s most recent copy of its corporate sponsorship guidelines, published late 2010, they list 12 types of businesses they are unable to accept proposals from and it includes “firearms.”

Whether or not that prevents the foundation from accepting donations is unclear, but it does confirm that S&W and Discount Gun Sales could not become an official partner with the charity.

Perhaps in 2009 it was a different story. Although there is still a lot left unsaid, there is a clear moral to this story. Before you take a side, make an accusation or a financial decision, be sure to think it through.