This Super Bowl is expected to be one of the most watched programs in the history of television.

Experts are predicting that as many as 110 million viewers could tune in to watch the New England Patriots take on the New York Giants in a rematch of Super Bowl XLII, one of the most epic games in Super Bowl history.

Capitalizing on this Brady v. E. Manning rematch are the mayors of the Big Apple and Beantown, who together have filmed a gun-control commercial that will air during Sunday’s big game in regional markets.

“Mayors (Michael) Bloomberg and (Tom) Menino have built a bi-partisan coalition of 600 mayors who are committed to supporting the rights of legal gun owners while doing more to crack down on the flow of illegal guns,” said Bloomberg spokesman Marc LaVorgna. 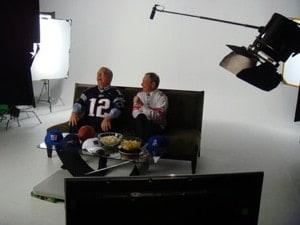 “A New York-Boston Super Bowl is a perfect opportunity for the mayors to talk about fixing the nation’s broken background check system that allows criminals and dangerous people to buy guns illegally,” he added.

Mayor Bloomberg and Mayor Menino are the founders and co-chairs of Mayors Against Illegal Guns, an organization of city mayors promoting tougher federal, state, and local gun regulation.

The commercial is a 30-sec spot that features the two sitting on the couch wearing Giants and Patriots jerseys over their shirts and ties.  The two play up the fierce Boston-New York Rivalry while making their pro-gun control pitch (see commercial below).

Mayors Against Illegal Guns certainly has some critics.

According to Glenn Reynolds, a distinguished law professor at the University of Tennessee College of Law, “A recent study found that mayors belonging to Bloomberg’s group have been arrested at a much higher rate than Tennessee handgun-carry permit holders, for crimes ranging from perjury and embezzlement to child sexual assault. But there’s no background check for politicians.”

For some reason this quote comes to mind, “A hypocrite is the kind of politician who would cut down a redwood tree, then mount the stump and make a speech for conservation.”