Izhmash, manufacturer of the famous AK-47, was at the 2012 SHOT Show last month in Las Vegas.  While at the world’s largest trade show for shooting-related activities and professions, they made quite an impression on U.S. customers, in particular U.S. law enforcement agencies.

According to a press release published on the company’s website, Izhmash signed several contracts to send a hefty supply of Saiga-12 semi-automatic, smoothbore shotguns to different police and law enforcement departments.

“The first Saiga-12 deliveries to U.S. law enforcement were already made in January 2012,” Izhmash General Director Maxim Kuzyuk said in the press release.

The press release added that Izhmash’s Saiga-12 is “popular in the USA because of its reliability, simplicity in the operation and to the advantageous relationship of price and quality.”

Additionally, executives from the company signed an agreement on exclusive imports to the U.S. market with the Russian Weapon Company and an agreement with Fime Group as Izhmash’s partner for manufacturing classic firearm models.

“The results of the exhibition are inspiring. The American market in non-military weapons is booming. We project a 20 percent increase in deliveries this year,” Kuzyuk said. 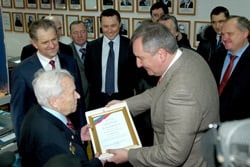 Other import arrangements were made between Izhmash and several Central American countries allowing for direct delivery of sporting and hunting firearms.  In the past, all deliveries to Central America had to be routed through the U.S.

Excited about the prospect of new markets and expanding its presence in existing one, Izhmash plans on participating in many of the other trade shows taking place in 2012, including, “IWA” (Germany), “weapon and safety” (Ukraine), “Defexpo Of india-2012” (India), “Eurosatory-2012” (France), “Indo of defence-2012” (Indonesia), “[Interpolitekh]” (Moscow), “INCREASE” (Izhevsk).

The Saiga-12 shotgun is, as its name might imply, chambered in 12-gauge.  It is built on an AK-47 platform, meaning just like the AK, it uses a clean gas-piston operating system.