To many the very symbol of gun culture, John Wayne left such an indelible mark on the shooting world, in effect cementing gunslinger iconography into the American imagination, that even shooters that are wildly critical of Hollywood depictions of firearms get nervous about wagging their finger at the Duke—and for good reason if you’ve seen any of his movies.

Indeed, John Wayne remains among the most respected and dare-we-say-it American of all silver screen gunmen and as long as we continue to fawn over his movies, the guns he carried in many of these landmark westerns will remain among the most popular reproductions with collectors. 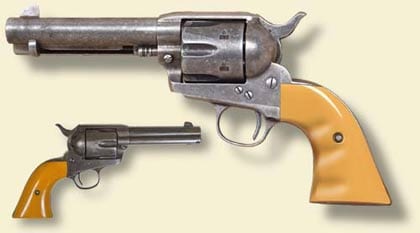 “Guns like the ones John Wayne carried are still among our most popular sellers,” said Chris Ballard, operations manager for Cimarron Firearms Co. in Fredericksburg, Texas. “If you want the kind of gun the Duke carried, we have a six-month back-order (waiting list).”  And that’s 36 years after Wayne’s final onscreen performance, 1976’s The Shootist.

In that film, Chisum, and perhaps his most unforgettable role, that of Rooster Cogburn in True Grit, Wayne carried a Colt 1896 Single Action Army pistol with butterscotch-colored single-screw grips.

“We call that our Rooster Gun,” Ballard said. “Our suggested retail price for it is $887.”

The guns are exact reproductions and fully firing weapons.

”This one fires a .45 caliber or 44/40 round,” Ballard noted. “This gun has been very popular during the four years we’ve been offering it. It never slows down.” 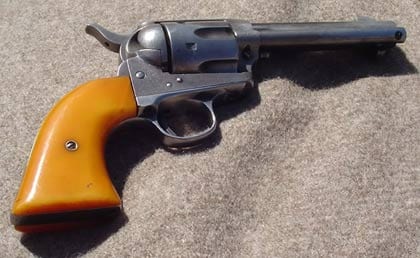 Cimarron Firearms Co., which boasts one of the largest inventories of reproduction antique firearms in the country, poured through Wayne’s biographical history (including many anecdotal reports from those who knew him on and off set and about his taste in firearms) to ensure the highest degree of authenticity when crafting their John Wayne inspired Colt Single Action Army.

According to reports, Wayne’s pistols had grips made of a substance called “Calalin,” a kind of Bakelite, a rugged type of early plastic noted for its durability and ability to withstand heat. Wayne reportedly liked the feel of the grips so much that he had them tea-stained to simulate aged ivory.  The Duke also had a special trigger-guard for his guns installed to accommodate his oversize trigger finger, thus making the weapon easier to twirl for the camera. 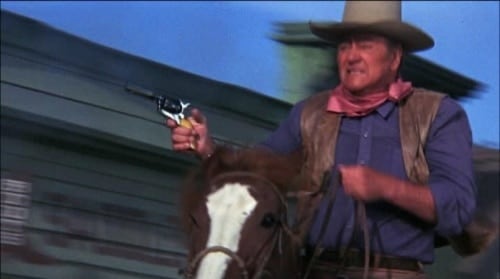 To say the Duke ensured the notoriety of the Colt SAA for years to come, may well be a fair statement, but to say he made the Peacemaker famous is certainly a falsehood.

First produced in 1872 for military service, the Colt Single Action was perhaps the most rugged and dependable of all firearms, indispensable to soldiers, ranchers, lawmen, outlaws, as well as cowboys (and cowboy actors). Its simple, functional design deeply influenced almost any model of revolver that followed it and it has in fact remained so popular among shooters (especially with the rise of Cowboy Action Shooting) it had never really become “obsolete”— as recently as 2010, Colt revived a third-generation issue of its Frontier Six Shooter featuring a nickel finish.

Named for dime novelist and con man Ned Buntline, the weapon was noted for its extra long barrel of 12 inches. There is no conclusive proof that Earp ever possessed such a weapon. Nevertheless, Ballard said a letter of the period exists confirming that Buntline ordered the specially-made pistol to be presented to Earp and other famous lawmen of the day in recognition for their exploits, and in appreciation for giving him a copy for his western stories.

What is known is that Earp didn’t carry the Buntline Special on the day of the famous Gunfight at the OK Corral, on Oct. 26, 1881.  Instead was armed with an 1869 .44 caliber model Smith and Wesson with an eight-inch barrel.

At the end of his life, Wayne gifted his guns and holster belt to an employee of his production company and they are now in a private collection. Their value is reportedly in the six figures.