The Smith & Wesson's Registered Magnum: Possibly, the Finest Handgun Ever Made

Today, magnum is a part of even the most casual shooters’ vocabulary but back in 1935, the term magnum was just entering shooter lexicon thanks to a new, beefed up .38 Special round that we know today as the .357 Magnum. The firm of Smith & Wesson would be the first to extend the label to handguns in the form of the Registered Magnum. Skeeter Skelton had one, so did George S. Patton and with a production run starting in 1935 and continuing for the foreseeable future as the S&W Model 27, many today consider the original Registered Magnum to be the greatest handgun ever made.

The Making of Magnum

As I alluded to above, the quest for a hotter handgun round began in 1929 when Douglas Wesson sought to improve the dismal self-defense performance of the .38 Special. What he introduced was the .38-44, a .38 Special that was capable of 1,100 fps out of a N-frame revolver chambered in .38 Special. To accompany the round, Smith and Wesson also introduced the S&W Heavy Duty, a N-frame with fixed sights, and an adjustable sight version called the Outdoorsman. 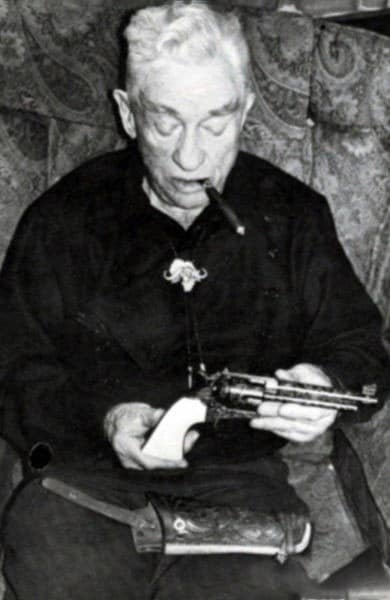 Both handguns became very popular among US shooters but, of more importance to the story of the Registered Magnum, these revolvers found favor among handloaders like Phil Sharpe and Elmer Keith. These vanguards of modern ballistics took Wesson’s cartridge and premise even further, demonstrating the round had yet to reach its full potential.

In 1933 based on those handloads Douglas Wesson was convinced that it was possible to get a 160 grain .38 round up to 1,400 fps. Remington wanted no part of the it, and told Wesson “There would be no call for a cartridge of such power and range.”

The folks at Winchester however jumped at the chance and after a year of testing, a .38-44 revolver they came up with what would be the factory round, a 158 grain bullet with a muzzle velocity of 1,515 fps and 812 foot pounds of energy. By today’s standards this ballistic performance may not blow up any skirts, but you have to keep in mind the year was 1935 and, before this cartridge/revolver combo, engineers could only dream of numbers like these in handgun.

Wesson had to come up with a name for the new round and gun and, at first, both were to be simply called the .357 Magnum, a term he defined as “a greater chamber capacity than military dimensions and power beyond the normal expectance of the caliber.”

The name “Registered Magnum” would be adopted later and came from the letters REG and a number engraved on the inside of the yoke cut of the frame. These numbers signified that it was up to the buyer to mail back the registration card that came with the gun back to the factory in order to obtain a registration certificate. This registration was not a form of company or government monitoring, just a guarantee of quality from the manufacturer.

Introduced in the middle of the Great Depression at $60 a pop, the new revolver was considered very expensive for its day, but this didn’t dissuade steady sales as it become readily apparent a gun of this quality was worth every penny and from the very beginning, noted shooters were comparing the world’s first magnum to a work of art.

Notorious lawman Skeeter Skelton declared the model—with a 5-inch barrel—the best all around handgun he had ever holstered. Patton referred to his 31⁄2 inch barrel, ivory handled registered magnum as his “killing gun”. The gun was also extremely popular with the FBI from the 1940s to the 1960s and was adopted by countless police departments.

The Finest Revolver Ever Made

Simply put, no other handgun produced on the level this gun was in the United States before or since has ever had the level of quality control at the factory level and individualized attention per unit as the Registered Magnum.

In reality something along the lines of a custom order handgun, each Registered Magnum was built upon to the specifications of the user. Every customer filled out an order form with the only expressed limit was that the barrel had to be kept between 3 ½ inches and 8 ¾ inches. The sights, finish, stocks and the distance that that the gun was to be sighted in at were all up to the person buying the gun (can you even imagine that level of service today?). The buyer could literally have their new revolver sighted in out to 200 yards—a service and feat unheard of in the 1930s.

The gun also ushered in some features we now expect in a revolver. For the first time in a centerfire revolver the buyer got recessed chambers. Features like this did nothing for strength or accuracy but made the gun easier to operate and were just a sign of quality—we take this granted now but at the time and step like this would likely be deemed unnecessary and a waste of money. The same could be said for the checkering on the surface of the barrel and the top strap. Overall the gun was famously durable and offered shooters six shots in the baddest handgun round of the age.

With twenty three different barrel lengths, two types of finish, thirteen different front sights, six different rear sights, and three different grip sizes available it is a wonder why the gun became popular and the gun is now highly sought after by collectors. 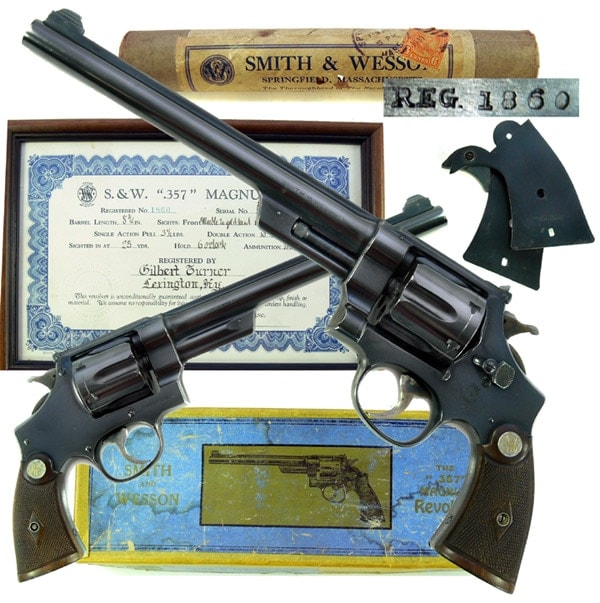 There were less than 6,000 Registered Magnums produced prior to 1940 when Smith & Wesson began cataloging the .357 Magnum as a standard revolver—now known as the Smith & Wesson Model 27 and later a stripped down, cheaper version the Model 28. Original examples go for many thousands of dollars with complete sets with registration certificate included climbing into five digits.

Given the time, thought and expense that went into making every single “factory” issue Registered Magnum, it’s hard to imagine a revolver ever being so finely made by a factory again.

But factories are still trying. What’s your pick for the finest handgun ever made?