Crosman makes an AR-to-pellet gun conversion kit.  We know, we’re all like, “Why?” too, until: “You’re getting great trigger time without going to the range and without buying .223 ammo. You can buy a tin of 500 pellets for about five bucks. I don’t know what 500 rounds of .223 is, but I know it’s not five bucks.”

The MAR177 is a .177 caliber pre-charged pneumatic AR upper.  It’s a match shooter, so it’s not nearly as high-velocity as other PCP airguns, but it should shoot comparably to your actual AR firing real boolits inside 50 yards or so.  Who knows, maybe even better. It meets the National Match Air Rifle competition requirements, after all.

Crosman’s pellet upper is as true to form as can be expected for an air-powered kit.  Even though it has a gas tank, the forearm is stylized after the AR standard and it has the carrying handle sights common to M4-patterned carbines.  They are removable, front and back, and reveal a flattop upper and matching front sight rail for any optics or iron sights you like.

It does weigh a touch more than what most uppers do at 7.375 pounds (to be precise) and the barrel is longer than most ARs these days at 20 inches (21 with the muzzle device), but it also gets about 120 shots per fill, and of course can be refilled easily in the standard array of ways, e.g. compressor, pump, or reserve tank.  It feeds from 10-shot magazines, and you have to charge the bolt manually between shots. 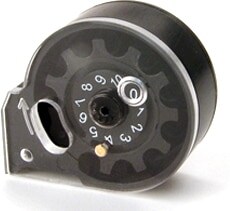 Airguns are of course quiet and easy to learn on, too, and fun like nothing else for kids.

The MSRP is on the high side, unfortunately, at $650.  Real-world, think $500 or even lower; the sticking point is that you can get a complete match pellet rifle for that price, or like, an actual AR upper, but you know what, we suspect people will think it’s worth it nonetheless.  The fact that this doubles as an AR trainer and plinker on the cheap makes up for its big sticker.  Plus it looks way cooler than your run-of-the-mill PCP gun.

Honestly, this is the perfect thing for anyone waiting in line for that .50 caliber black powder AR…