The Army's Upgrading the Ma Deuce: Meet the M2A1 (VIDEO)

The M2A1 is the only significant change to The Fifty since John Browning designed it.  It’s a quick-change barrel mod that greatly simplifies the process.  The problem is that there are so many M2s in service, M2s that don’t have the mod.  The Army’s nipping that right in the bud.

The air-cooled barrel of the M2 is designed to be swapped out as it is, but it’s a tedious affair. U.S. Ordnance developed the M2A1 (a.k.a. the M2E2, M2 E50, M2 Flex, or M2 Quick Change Barrel) a while back that doesn’t require manually setting and checking the headspace.  If the barrel isn’t headspaced correctly, well, bad things happen.

So Congress has cut a check for to the Army to have them retrofit 6,400 M2s with the quick-change barrel system.  It costs about half (between $5,300-5,700) to upgrade an M2 than it does to buy a new heavy machine gun ($11,400).  The total bill will be $34M, which, when you think about military spending, is almost nothing, especially when it’s going for improved small arms.

And there have been accidents.  “The M2 has been linked to weapons malfunctions and injuries in Iraq and Afghanistan. Since December 2007, at least 143 malfunctions occurred, including 124 in Iraq and 19 in Afghanistan, and at least 39 soldiers were injured from 2009 to 2011, Army Major Christopher Kasker said in an e-mail.”

But it’s not just a safety issue, the Army isn’t just about to drop that kind of scratch to prevent a few dozen malfunction and a handful of injuries a year.  It’s about saving time, and it’s not even remotely a stretch to say that cutting seconds off a barrel change is a life-saving measure.

The guns will be sent back to the Anniston Army Depot in Alabama.  They’re not new to the process as they’re the people who converted the first test run of 1,700 M2s starting of August of last year.  If things worked well, which it clearly did, they were going to do the job of converting the next 3,600.  The fact that the Army pushed that up to a couple thousand speaks volumes. 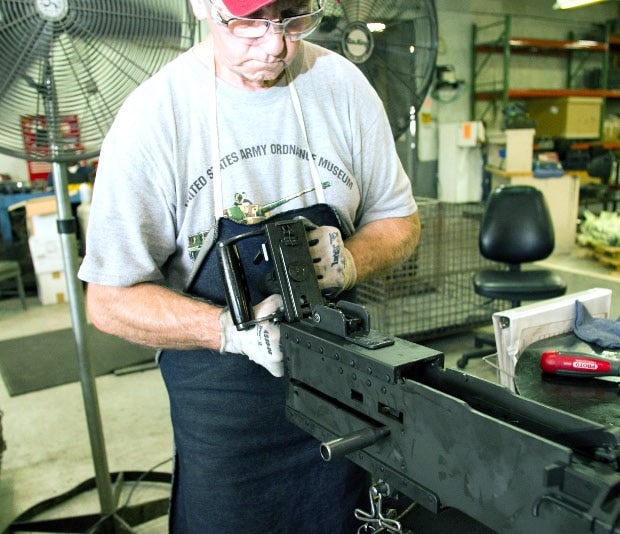 That being said, the Army eventually wants a total of 28,000 conversion kits, and several companies have thrown their hat into the ring: Advanced Precision LLC of Nevada, Baxter Machine & Tool Co. in Michigan, Ohio Ordnance Works Inc. in Ohio (dur), Midwest Tool & Die Corp. in Indiana, and MRF Machine and Hydraulics Inc. also in Ohio.