In January 2010, Gerald Ung went out with a female friend in Philadelphia’s Old City neighborhood.

As the night was coming to an end, the 29-year-old Temple law school student was accosted by three other nightlife denizens: Eddie DiDonato, Jr., Thomas Kelly and Andrew DiLoretto.

The altercation quickly escalated and DiDonato charged at Ung, a licensed gun owner in his home state of Virginia, which has CCW reciprocity with Pennsylvania.

Ung, fearing for his safety, pulled out his handgun and fired a half-dozen times at DiDonato, hitting him in the hand, abdomen and back.

Ung was immediately arrested.  He was charged with attempted murder, aggravated assault and possession of an instrument of crime.

In February 2010, Ung was tried before a jury of his peers.  He argued that he acted in self-defense and gave an emotional testimony of that fateful night.

On February 15, the jury rendered its verdict: not guilty.  He was acquitted on all charges.

“The jury has spoken and I respect the decision, but I am greatly disappointed for Eddie and his family,” Assistant District Attorney Jan McDermott, the chief prosecutor, told local reporters. “I feel badly for what he and they (the DiDonato family) have been through.

“He has four bullets in him and his paralysis is likely permanent,” she added.

“This is not a day to be ecstatic and happy,” he said. “This was a tragedy. A lot of bad choices were made that night and the jury obviously thought of self-defense.”

“There are no winners. Mr. DiDonato suffered injuries and I hope that he can improve and get his life back just as Mr. Ung gets his life back.”

After the trial things had seemed to calm down for Mr. Ung.  He was attempting to get his life back on track.  That was until this past December (2011), when Eddie along with the help of his father, a prominent partner at the Fox Rothschild law firm, filed a civil lawsuit against Ung seeking punitive and compensatory damages for the shooting. 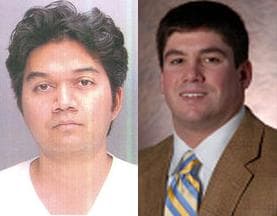 But DiDonato is not just suing Ung; he is also suing five Philadelphia restaurants and bars that he claims over-served either Ung or his friends (Kelly and DiLoretto) on the night of the incident.

The lawsuit alleges that the bars served alcohol to Ung, even though “he was in a visibly intoxicated condition” and that this was “in direct violation of the Pennsylvania Dram Shop Act” and “a direct and proximate cause of Plaintiff’s injuries.”

In short, they are suing everyone they think they might be able to get money from.

Since Ung is a college student, or recent graduate, it’s unlikely that he has a lot of money to pay out to DiDonato.  Nevertheless, they’re going to go after him for whatever they can get.

Does DiDonato’s case have a chance in court?

Well, what’s interesting about this case is that it happened prior to the passage of Pennsylvania’s “Castle Doctrine” revision, which expanded self-defense rights for law-abiding citizens (outside the home) and provided a civil immunity provision to safeguard individuals who lawfully defend themselves from civil lawsuits.

Had the incident happened after the passage of the Castle Doctrine expansion, which passed in June 2011, there’s a good chance that DiDonato would have no case against Ung. 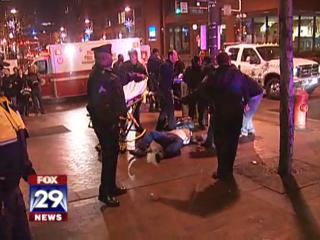 But because it happened prior to the passage of the measure, Ung could be on the hook for those compensatory and punitive damages.

We’ve seen this before in Colorado Springs, CO, where individuals who lawfully used deadly force were acquitted in a criminal court, but were forced to pay out damages because there was no protection from civil (frivolous) lawsuits.

Some have argued that the “Castle Doctrine” should be applied retroactively since the civil suit was filed (in Dec. 2011) after its passage (in June 2011).  But legal experts say that it’s not the way it works.

Ung will most likely have to demonstrate that he acted in accordance with the law, in the way it was written at the time of the shooting, to avoid paying out money.

In other words, he’ll have to prove to a jury that he tried to retreat before he resorted to using deadly force.

In any event, we’ll keep you posted as things continue to develop.