Concentrate on your Finger: Trigger Control and What it Means to Accuracy

Some people like the term “press”, others prefer “pull” and still others use the term “squeeze.” Whatever word you use doesn’t matter, what matters are accurate shots on target and when it comes to marksmanship fundamentals, trigger control is one of the two most important (the other being sight alignment.) It doesn’t matter if you’re standing on your head or shooting the gun upside-down, as long as your trigger pull is smooth and straight to the rear while your sights are aligned, you’ll hit your target every time.

The techniques required for accurate shot placement are simple really, but even still the process includes so many variables that no shooter will achieve perfect trigger control 100 percent of the time. But we can try, so let’s see what right looks like when it comes time to let the hammer fly (and what wrong looks like too). 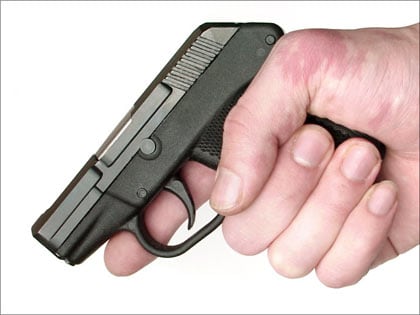 The position of your finger on the trigger is vitally important to shooting accurately consistently. Ideally, you want to place the trigger comfortably between the tip of your index finger and the first knuckle, using the middle, cushioned area of the fingerprint.  This provides the best, most even surface from which to apply force straight back and limits the chances your pull will adversely affect the trajectory of your shots.

This finger positioning may feel a bit alien to some shooters (both veterans who have developed bad habits and newcomers) and it’s really important to feel comfortable when behind your firearm so strive to practice this technique whenever you’re at the range. Through practice you will a) acclimate yourself to this method of trigger pull and b) determine the most comfortable way for you to perform this technique. 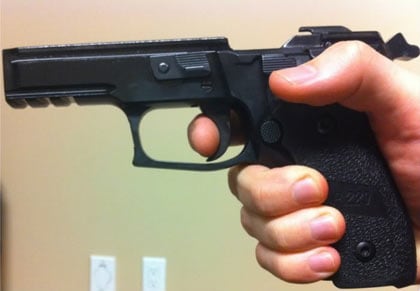 Whatever you do, do not use the tip of your finger (i.e. the part closest to your fingernail) to depress the trigger. Doing so is more likely to cause you to push on the trigger from a different angle than straight back and to the rear and this will cause your rounds to go off mark.

Similarly, you don’t want to have too much finger wrapped around your trigger. Of late, I’ve seen a few young combat Vets using this deep trigger pull—that is, they put the metal of the trigger in or beyond the first knuckle (sometimes it makes me wonder what the Marine Corps are teaching nowadays).  At any rate, too much trigger will also cause a shooter to pull rounds to the left or the right for the exact same reason too shallow of a trigger finger will—inevitably, the shooter has a harder time pulling the trigger straight and to the rear.

The Finger Bones Connected to the… 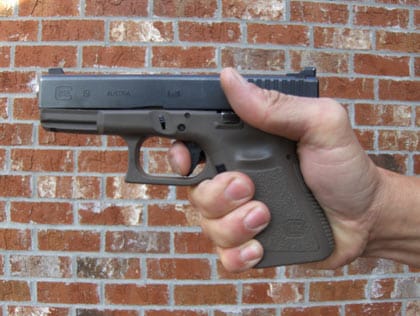 Much is made about how your finger acts when you shoot (as well should be) but let’s not forget your fingers ability to move comfortably is very much dependent on the way you position the rest of your hand and body.

If the finger is in the proper place, your palm grip also needs to be in the correct position. The web of the shooting hand – that distinctly primate part between of the body the thumb and index finger – needs to be placed in line with the grip of the weapon, up high on the tang – the rear indent of the semi-auto pistol grip directly below the hammer and slide. Now, when you shoot, your trigger finger can follow an imaginary line, straight back to towards your palm webbing; this will help your trigger pull be the same every time.

One thing to avoid when considering your grip is squeezing your palm to tightly or convulsively around the grip, which shooting instructors call milking.  This added pressure come strange angles can cause your shots to go low and left (for a right handed shooter). This is especially noticeable when using a pistol, but important also when using a rifle or shotgun.

A Look at “Combat Triggers” 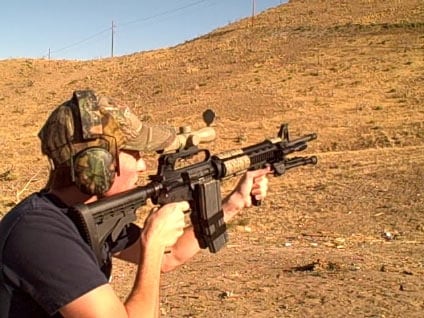 I have to admit something here. Those same Marine shooters, who I noticed had the ultra deep trigger finger, may be able to shoot their M-4 / AR-15 very well. So why, if shot placement matters the most, would I say their trigger technique is incorrect or a “bad thing”? Two reasons.

First, because using the correct position of the finger will allow for the greatest feeling and dexterity in your digit, which helps you better intuit the triggers operation and in turn work the trigger smoothly. I don’t care how well you shoot, this is the physics and anatomy of it—the most even, controlled and conscious manner of depressing a trigger is with the first pad of your finger. As I like to say to my students, be rough on all parts of the weapon, but caress and care for that trigger.

Second, a “combat trigger,” as my colleague likes to call a deep, goofed-up looking trigger pull technique, will not apply to multiple weapon systems. For example, a shooter with smaller hands can easily wrap his/her fingers around the pistol grip of an AR-15, but that grip won’t be exactly the same when grabbing a large handgun—in fact if you think about it, there’s no way the person could have the same trigger placement on multiple weapons and consistency of positioning is crucial to shooting accurately.

It’s my opinion that, if any technique won’t work the same way for multiple guns, it’s probably worth getting rid of. I don’t know about you, but I want to have the confidence that if I happened to disarm a bad guy that I could use his own gun against him if need be. Just saying. 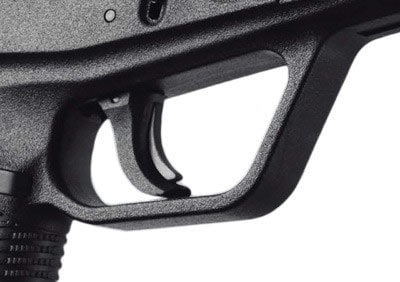 Trigger reset refers to techniques that allow shooters to fire successive shots with the trigger pull having a minimal effect on the accuracy of each shots. To perform this technique, you should keep your finger resting on the trigger for the entire shot series.

Pull the trigger, then let it go slowly until the trigger resets. That reset gives a distinct metallic “click,” which can be heard and felt if you’re shooting slowly.  Once it resets, you should apply the same even pressure, straight back to fire another shot.

This is a fast technique but should be practiced slow at first.  Speed will come with repetition.

It’s also a technique that is perhaps better seen than read so I put together a short video on trigger control and trigger reset. I did some things right, and I demonstrated things incorrectly as well. You’ll notice as you watch the video that I demonstrated a few things listed above, as well as accelerated pairs, which is also called a hammer drill, but more commonly referred to as a double tap.

In the video you’ll notice, while demonstrating trigger reset I perform several rapid shots. Remember, if you have to shoot someone center mass, you need to shoot until that person is no longer a threat, but if you’re shooting quickly like that, the muzzle of the gun might begin to rise, seriously hurting accuracy. To combat muzzle flip like this, adopt an aggressive stance and an aggressive attitude.

One of the things I like to do when I’m teaching shooters who are struggling a bit, is get up close beside them while they’re shooting and say aloud, “smooth in, smooth out.”  If a shooter jumps off the trigger, it will most definitely mess up their shot placement and can turn into a valuable learning experience.

Jumping off the trigger (by that I mean releasing the trigger rapidly and erratically) is one of the most common and one of the most unrecognized detriments to accurate shooting.  Any jerky movements during the trigger pull will affect the entire gun, the barrel will wobble and the shot will most often miss its intended target.  Practicing trigger concentration is really the only way I know of to recognize and combat this.

In closing, take away this golden rule: to shoot a gun accurately, trigger press – or pull, or squeeze – must be smooth and consistent. Treat your gun’s trigger with TLC (Tender, Loving Care) and you’ll make that gun – whatever gun it might be – sing.  Until next time, continue to hone your skills and keep adding to your tactical toolbox.