Excel Arms, operating out of Chino, California, has been cranking out rimfire pistols and rifles in .22 Long Rifle and Magnum for some time, but now they’re courting the old favorite, .30 Carbine, with both handguns and carbines.

The Firearm Blog caught up with them at SHOT Show and took photos of the X-30R and X-30P in the wild, or at least, partial captivity.  They’re a world apart from the M1 Carbine, that’s for sure. 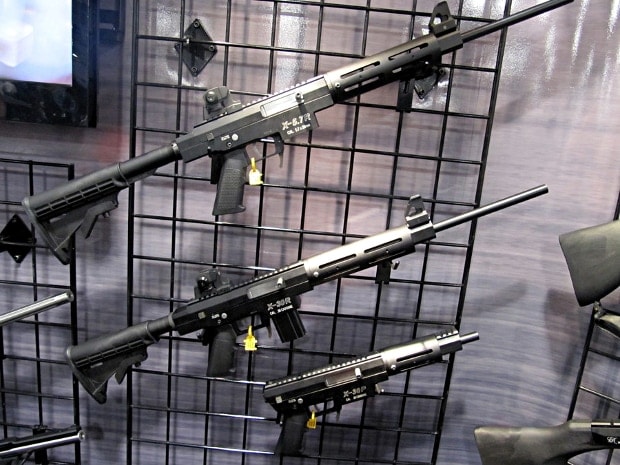 Besides being extra tactical black with black flattop rails for backup iron sights, the guns rock AR grips, and if present, an AR collapsible stock.  The forearm is drilled and tapped for additional rails if need be.  But the X-30s shed more than just wood for anodized aluminum, the rotating bolt, gas piston operation has been dropped in favor of delayed blowback.

Surprisingly enough, and probably because of the bolt, they’re heavier than the M1 Carbine, but only by a little.  The X-30R weighs 6¼ pounds and the P 4½ (and the M1 5.2).  The carbine has the same amount of barrel as the M1, eighteen inches, and the pistol’s got a generous 8½.  We suspect it’s still capable of shooting fireballs, though.

One of the few things these firearms have in common with the M1 besides the caliber is the magazines.  Yep, while they ship with ten- or 20-round magazines, you will have no problems using fifteen- and 30-round surplus M1 mags with them.

And while the pistol seems largely a novelty, albeit one that we would love to make some noise with at the range, the carbine model obviously has a lot more going for it.  Military ball ammunition is alright, and out of an eighteen-inch barrel it makes almost 900 ft-lbs of energy; soft point or hollow point hunting-slash-defense ammo, while less common, comes in at just under 1,000 and moves a 100-110-grain bullet at around 2,000 FPS.

So it should be said, .30 Carbine is good for what it was designed to do, and the X-30R looks like a great way to shoot it.  And recently, Excel Arms developed similar pistols and carbines in 5.7x28mm, if that’s your thing.

Excel plans on getting them in stores soon, and hopefully not for more than M1 Carbines, to boot.