Some stories beg to be told, and one of those is that of a man named Jack Hinson—family man turned one-man army and one of the Civil War’s most prolific sniper.

Man on a Wire

At the outbreak of the Civil War Hinson owned a flourishing plantation in Stewart County, Tennessee.  The wealthy father of ten children, Hinson opposed secession, had actually freed his slaves prior to the Emancipation Proclamation and even once had General Ulysses S. Grant over for supper. This being the case Hinson decided to sit out the war, refusing to choose a side even when one of his sons enlisted in the Confederate Army. Unfortunately for Hinson, the atrocities of war would choose a side for him in 1862 when a Union Patrol picked up his Hinson’s sons, George and John (who like their father were not affiliated with either side) while out hunting for game.

The Union soldiers from the 5th Iowa Cavalry assumed the two Hinson boys were rebel guerillas despite their pleas of innocence. The two were disarmed, tied to a tree and then shot. As a further outrage, a lieutenant with the company used his sword to decapitate the two and set their heads on posts around the Hinson farm.

The Right Tool for the Job

Hinson had no military experience that we know of, but at the time hunting game was a basic component of American life at all levels of the socio-economic ladder and Jack—a rich plantation owner with ample leisure time—was dedicated and skilled marksman and woodsman. 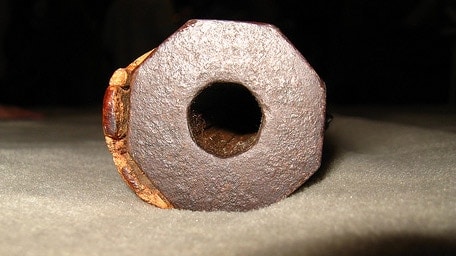 After the death of his sons Hinson did not retaliate immediately but instead quietly ordered a very special rifle: a .50 caliber Kentucky Rifle that had a 41″ barrel and weighed a whopping 18 pounds. This rifle—in the hands of Hinson—could hit targets at about half a mile away, making it far more powerful than most firearms to see service during the Civil War.  It would also prove to be many a bluecoats undoing.

Jack Hinson moved into a cave above the Tennessee River where he could watch the passing Union transports. He targeted the officers because it was a lieutenant’s sword that cut his boys heads off and he held the top brass responsible for the orders to raid his others family farms. Hinson also targeted the river pilots and tormented gunboats in an effort to disrupt the traffic and supply lines on the river below. During the Civil War the rivers were the lifelines of the armies, and any disruption could mean winning or losing a battle. 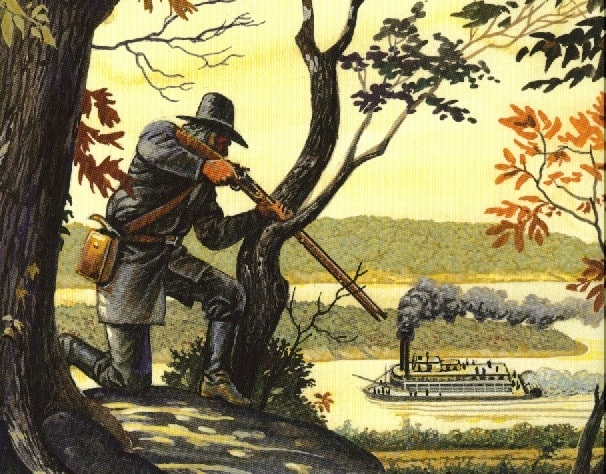 When the Union patrols began to hunt for him Hinson moved his family out of their farmhouse, leaving them in the care of his former slaves who guarded them with their lives. Hinson stayed behind to keep up his harassment of the Union forces.

Jack Hinson never actually joined the Confederacy but he aided General Nathan B. Forrest as a scout and guide during the Battle of Johnsonville, resulting in a southern victory. 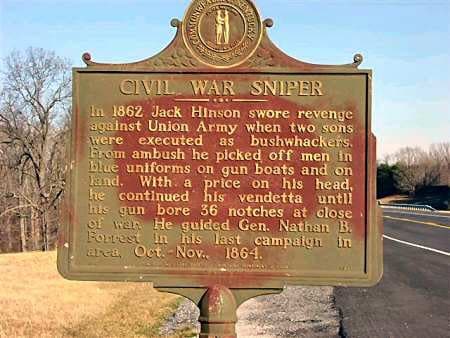 Despite being hunted by four Union regiments and living the entirety of the war largely at the mercy of the elements, Hinson would live to see peace again though the war was not kind to Jack. Two of his youngest children died of the measles while they were in hiding, and his son who joined the Confederacy was killed in combat, meaning the Civil War would claim five of his ten children.

Historians place the number of Union officers and pilots that fell to Jack Hinson’s Kentucky rifle at around one hundred.  Jack Hinson died peacefully in 1874, largely unknown to history.