People were in a tizzy yesterday when photos surfaced of stadium sniper perches at Super Bowl XLVI.

The images showed sharpshooters from the Indianapolis Metropolitan Police and their high-powered rifles looking down on the masses, an estimated 70,000 fans attended the big game on Sunday, at Lucas Oil Stadium in Indianapolis, Indiana. 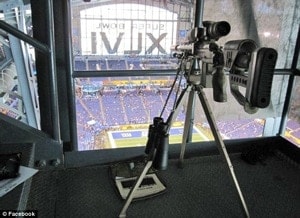 U.S. Tactical Supply released the photos on their Facebook page.  The Oregon-based company posted the photos as a way to promote their equipment (a tripod), which was being used by the officers.

The photos went viral and sent the Internet ablaze with comments from concerned citizens.

“What kind of world we created…” one user wrote on the U.S. Tactical Supply Facebook page. 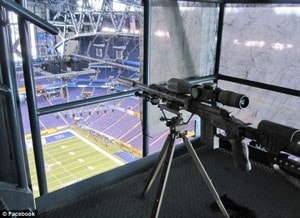 “@anyone believing that measures like Steve pointed are for our protection.  You are part of the problem.  Wake up to reality.  They will be turned on us when the timing is right,” another user wrote.

U.S. Tactical Supply eventually took down the pictures, saying they sparked too much controversy from Facebook commentators who were outraged by the show of heavy weaponry.

However, to replace the controversial in-stadium pictures, the company posted new photos of other rifles set up on the rooftops surrounding the stadium.  Whether posting more gun pics was a jab at critics or an earnest attempt to quell the controversy is unclear. 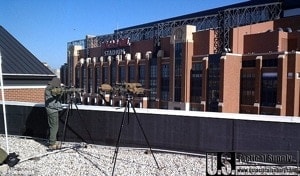 But what is clear in all of this is that placing sharpshooters in Super Bowl stadiums is a standard operating procedure in a post-9/11 world.

In 2009, Ashton Kutcher posted a video outside Raymond James Stadium, in Tampa, Florida, the site of Super Bowl XLIII, which showed two sharpshooters preparing for the big game.

The Indianapolis Metropolitan Police officer seen in the photos was not identified; his face was blurred out prior to the photos being posted (as you can see in the pics).

As for the gun in the picture, it’s a bolt-action Remington 700 with a custom-made stock from XLR Industries.