Back in December, Mayor Bloomberg published the findings of his undercover probe, Point, Click, Fire: An Investigation of Illegal Online Gun Sales.

In those findings, KSL.com was named as one of the main culprits for unscrupulous online gun sales.

The online portal for Utah’s NBC affiliate and sister radio station is owned and operated by a for-profit branch of the Mormon Church.  The site is a hotspot for millions of users looking to buy and sell various items both regionally and abroad.

According to the report, KSL.com had the third-most active gun listings of any site on the web during a 100-day period last year with 2,713, beating out even Craigslist (see chart below).

When Bloomberg investigators conducted “integrity tests” on sellers who had posted guns for sale on KSL.com, 67% failed the test.

The integrity tests consisted of the faux buyer (the investigator) alerting the seller he/she could not pass a background check, then seeing if the seller would still go ahead with the transaction.

In eight of 12 set ups, the seller gladly sold the gun to the shady buyer. 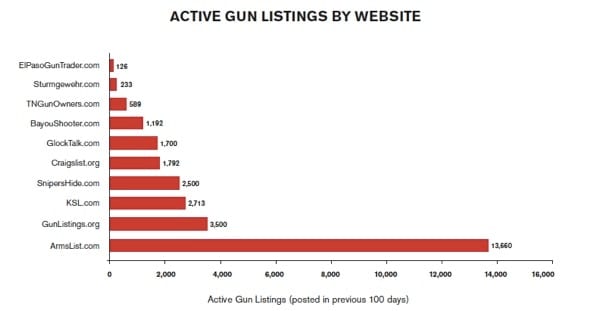 “A church, like any other organization, has the right to raise money,” a Bloomberg disciple, who requested anonymity because he was not authorized to speak for the mayor (but was involved in the investigation), told Buzzfeed.com. “But one would think that a church would feel a special obligation to make sure that they weren’t fueling a black market for a particularly deadly form of commerce.”

Critics of KSL.com also pointed to the “unregulated nature” of the site as a major cause for concern.  They argued that while other websites require users to give up personal information and set up authorized accounts, KSL.com allows individuals to skirt these procedures making it easier for illegal deals to go down.

[On KSL.com] sellers frequently list their contact email and phone number, which are openly displayed on the ad. This feature makes it easy for buyers to contact sellers and arrange to buy a ﬁrearm without identifying themselves – a feature that is particularly attractive to unscrupulous purchasers who do not want their purchases detected or recorded. And the website allows visitors to search for items being sold by private individuals who, in contrast to licensed dealers, are not required to conduct background checks.

Brett Atkinson, general manager of the site, told Buzzfeed.com that KSL is a “responsible corporate citizen” that cooperates with law enforcement, and “frequently reviews its policies and procedures.” 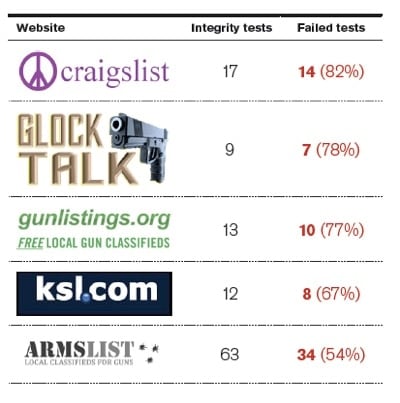 At one point KSL did consider removing the firearm category from its website, according to an article published last March in the Deseret News.com.   However, instead they opted to ensure polices as well as information related to the sale of firearms was more prominently displayed on the KSL homepage.

“Public trust and safety are paramount values for our company,” Atkinson told Deseret News.  “We invest significant resources into creating a safe haven on KSL.com. We have a team that works to remove fraudulent classified ads from the site. We also work with law enforcement, providing information that it subpoenas.”

But critics, like that Bloomberg investigator, are saying more needs to be done to thwart illicit gun sales.

“The fact that they have looked into this makes it clear that they understand they have a problem, he said. “If they have essentially decided to press on without taking effective action, it seems they’ve made a choice to put profits over principle.”

“If you’re going to [facilitate sales] for something deadly, you have an obligation to make sure it’s done legally and appropriately,” the investigator continued. “Just throwing up your hands and saying, ‘We’re not willing to give up this profit center’ is unacceptable, and particularly so when it comes from a religious organization.”