Guns & Gardens is the number one source, according to Guns & Gardens, on how to survive the zombie apocalypse.  We can’t disagree with their philosophy, or their mission.  And OMG, have they even built the BEST ZOMPOC AR EVAR.

Starting with the rifle, they’ve chosen to go with one of the most depended-on ARs in this country, an M&P15.

Not a Sport or anything to cut costs, but no frills, either.  This is a standard direct-impingement M4-style AR, with standard M4 furniture and the cutout, because honestly, when the zombies come, no one will really mind if you sling an M203 under there.

Not that you’d really want to with the OMG AR-15 Unicorn, as it’s already equipped with the most versatile and life-saving, zombie-churning of accessories, a chainsaw.

“We decided against modifying the saw too much, so instead of cutting it up and re-distributing the battery and power switch all over the rifle, we simply flipped the saw over and reversed the direction of the motor and chain – so the saw is upside-down, but it operates as if it was positioned normally. We also removed the saw’s safety switch because it was creating a critical delay in response time.” 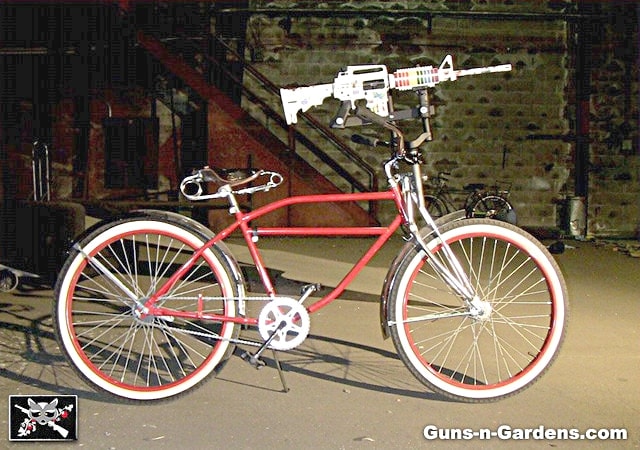 And then there’s the most important modification to the rifle: the unicorn.  The rainbows are pretty smart, too, but the unicorn and the phalanx of ponies are the heart and soul of this zombie-killer.

Some people say that zombies’ primitive, even rudimentary brains become entranced with the bright colors and otherworldly themes.  Others say that the simple designs convey a message of love and beauty that connects with the undead’s last vestiges of humanity.  But that’s not the most important thing.  The unicorn is necessary because LITTLE GIRLS LIKE RIFLES, TOO.

So stop Monday-morning quarterbacking the tactical decisions made while constructing one of the greatest tools ever designed to thwart the unyielding horde and get your cutest li’l zombie-slayer an OMG AR-15 Unicorn for her next birthday.  It will mean the world to her, and might even save her life and yours.