Why I Concealed Carry Today: Because of James Brown

In the winter of 1997 an armed robbery drastically altered my understanding of self-defense and consequently the world.  This is the story as to why (and in a very literal sense, how) I became a concealed carrier:

It was January 1997 and I was living and working in Atlanta at MindSpring Enterprises, a now defunct Internet Service Provider. One Friday, while walking the five blocks to a favorite sandwich shop in Midtown for lunch, a small black man caught my sleeve in the crosswalk at Peachtree and 14th.  I grabbed his wrist in my left hand—a reflexive move that surprised him and me.  He cowered and a small white woman ducked behind him, as if I was going to hit her. 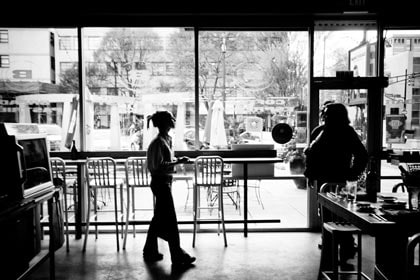 I let him go, but he reached out and touched my forearm with the care of a politician.  “We need some help.”  When I said nothing, he continued.  “Our car broke down.  While I was looking for a garage, it got towed.  My wallet, luggage….  My wife,” he said, acknowledging the woman in his shadow, “is pregnant.”

We stood still in the crosswalk.  The woman hid her hands in the pleats of a grey maternity dress.

Whatever it is that passes for instinct said walk away, but I didn’t.  I asked the inevitable question: “What’s wrong with your car?”

Are You A Christian?

“I’m a doctor,” he said.  “Don’t know a thing about cars.  I’m presenting a paper at a conference.  All I need is a ride to the impound yard.”

I’d parked in a pay lot two blocks over and we made small talk.  He said he had a practice in Manhattan.  He told me his name was something Frizzel, but I could call him “Lefty” if I couldn’t pronounce that.  His wife was named Doreen.  Either he was trustworthy, or their grift was well scripted.

I drove a blue 1984 Dodge Caravan, a hand-me-down from my uncle.  I opened the passenger door for Doreen.  Lefty opened the sliding back door himself.

“Listen, son, your charity will be well rewarded.”  He scooted in where the seats should have been, but they were long gone.

I buckled my seatbelt. 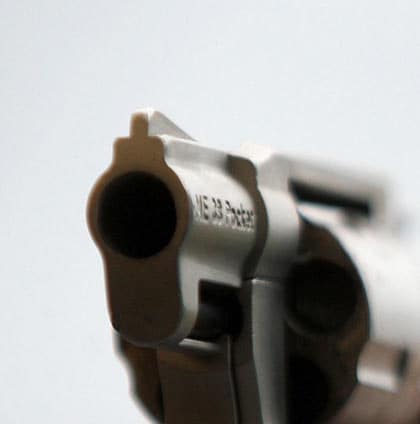 “Drive.” he said, and he tucked a snub nosed .38 revolver up behind my ear.

My mouth filled with an electric tinge, as if the gun were stuck through a hole in the back of my head and into my mouth—it tasted like pennies.   The heater blew cold air from the cold engine.  January cold and I was sweating.  If he’d shot me, there would’ve been an empty chair in an empty cubicle.  If anyone at MindSpring noticed, they’d assume I quit.

An Afternoon Drive Around Midtown Atlanta

I drove, but I hadn’t figured out where I was going.

“I pray every day,” Lefty says.  “Not for riches or health.  No.  I say ‘Lord shape my heart like Jesus’s heart.’  That’s how to be a Christian.”  He twirled my hair with the gun.

“You can’t just talk about mercy,” Lefty said, “or helping the poor.  You have to walk with the poor.  ‘What you do unto the least of God’s creatures….’” He stopped and changed his tone.

“You never said—are you a God-fearing-Christian?”  He wasn’t looking at me.  He was checking where we are. 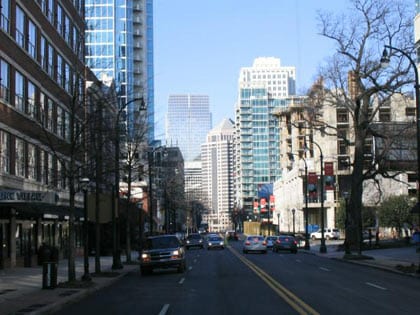 There are networks of neighborhoods in Midtown Atlanta and many have zoning ordinances meaning in certain neighborhoods, you’ll find boutiques, the occasional restaurant but no banks.  I turned into this green maze, under the canopy of hundred year old oaks, and drove past quiet Craftsman bungalows.  But this move apparently lacked subtlety as Lefty was watching the cross streets, too, and seemed to catch what I was doing.

I didn’t know what the inevitable was, exactly.  So I ignored his suggestions and drove.

The Parable of the Good Samaritan

I drove around like this for more than half an hour, listening to him preach.

“Turn right on Monroe, and left onto Ponce,” he said.  Then he cocked the revolver and I swear the gun whispered in my ear, I think you will.

“You know the parable of the good Samaritan?  Man finds himself in the wrong part of town.  He’s in a bad way ‘cause he knows he isn’t right with Jesus.”  He smiled.  “Remember this: when you walk with the Lord, you have nothing to fear, not even death.  So this dude gets all cut up.  These punks just leave him lying on the side of the road, bleeding, and nobody wants to touch him.  He doesn’t look rich, see.  Bad luck is catching.  Turn here.”

And there was the bank.  Traffic was thick, so I waited in line to turn into the parking lot.  A guard stood stoic in front of the walk up ATM, but I was clearly expected to use the drive-thru.  This woman riding shotgun who hadn’t spoken the entire time—they probably assumed she was with me.  That was probably the plan all along. 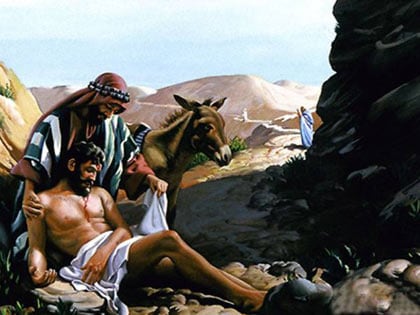 Lefty leaned his weight on the tip of the barrel in the ravine between two of my ribs.  He strummed abrasively.  At last, a tangible pain—for all his mumbo jumbo about being a Christian, this man had no problem hurting me.

The woman leaned her head just slightly to one side.  I still couldn’t get a good look at her, but I saw enough.  A large triangular nose.  No chin.  She looked like a rat.

“What happened with the Samaritan?” She asked.

Maybe she hadn’t heard the story.

Fists in a Gunfight

From the ATM on the far end of the drive-thru lanes, I waved to the teller behind the green bulletproof window.  She smiled and waved back.  I could only take out two hundred dollars—which was almost everything I had at the time, but a reasonable figure for my life, if that is what it bought. 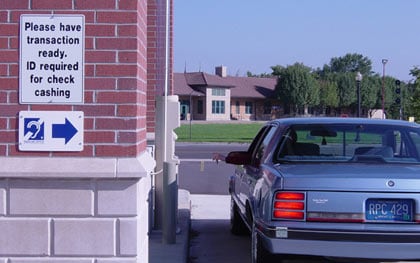 I withdrew the money and I turned to hand Lefty the bills.  He crouched in the back seat, rose on his knees to collect my money and that’s when I made my move.  The bills slapped across his forehead as my knuckles crashed into the bridge of his nose—not a punch exactly, but he fell backward and I nudged the gas.  He pulled himself up with the back of my seat and pistol-whipped my head.  My scalp split and I didn’t know how bad—but he did not shoot me, and I knew then that, given the chance, he wouldn’t.

He straightened his collar under his sweater.  “You made me lose my cool,” he spat. “Son, you have to fly right.  Jesus wouldn’t want you to say he is the way and the light and stumble around all day praising him.  Live your life as he lived his.  The meek shall inherit the Earth.  That’s what this is, see, a small part of my inheritance.”

“I have to get back to work,” I said.  But before I could complete the sentiment, Lefty slapped the back of my head.  There was a damp matted thwack and he sat back on his heels, repulsed by my blood on his palm.

What would Jesus do?

I saw a man get shot once, in Chattanooga, Tennessee when I was 11-years old. A tall white kid stumbled out of the front door of a hotel, a purse in his hand.  Someone inside yelled some cliché.  A barrel-chested black man stepped into the kid’s path.  They collided, and the kid fell backward on the cement walk.  But he pulled a pistol from the waistband of his pants, and shot the man who had tried to stop him.

I was right there, close enough to smell the gun powder. 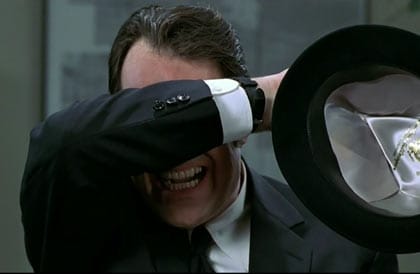 At that point in my life, I’d never killed anything.  I would never have considered myself a violent person, but right then I understood how easily I could wrap my head around taking this dude’s life.  All of my pseudo pacifist, anti-death penalty rhetoric.  To hell with it.  I would have, in that moment, killed this man.  He was slight, I was bigger.  I could’ve crushed him and I would’ve tried previously if I wasn’t so scared of the gun.

I’d been in the van with him at that point for close to an hour and I’d finally had enough.

I turned out of the bank, looking for the accident I was about to cause.  If the traffic broke, I planned on making a run at a light pole.  And then, one of the weirdest days in my entire life did the impossible—it got a whole lot weirder.

Two blocks west on Ponce, we slowed down to a crawl.  Cars clogged the intersection, and as I craned my neck to see why we’d stopped, I caught glimpse of a limousine parked across one lane and most of the sidewalk. 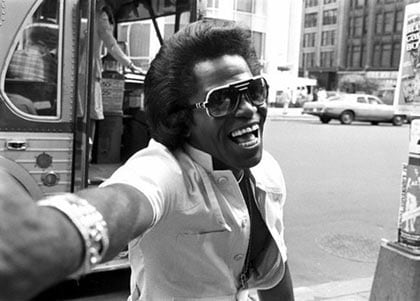 But what had really ground traffic to a standstill was an amassing crowd of lunch-time walkers, congregating at a less than respectable distance around the vehicle.  The three of us, a hostage and his two captors, sat together, captivated by the spectacle going down before our eyes.

Suddenly a man and a woman stepped out of the limo, and my mind raced to make sense of anything at this point as she draped an overcoat around his shoulders like a cape.  He looked like the Captain Morgan pirate, only he was black.

“Goddamn.  Louis,” Doreen said from the passenger seat.  “I think that’s James Brown.”  Louis looks up and I stood on the brakes.  He crumpled face-first between our seats into the dashboard. I was free of the seatbelt, out the door, and lost in the safety of the curious crowd. 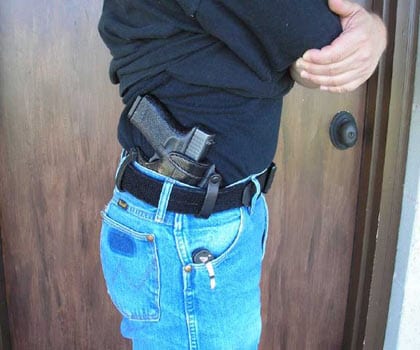 I would find out later Brown was in town for a concert that night and was making some promotional appearances before the gig.  I reported the incident to the police, who escorted me back to my car, though they never officially found my kidnappers (I’d like to think it was only a matter of time before the hammer came down on them.  They were pretty stupid criminals).  I felt stupid too in the aftermath and it took a long time for me trust people again.  People often undervalue the mental toll an incident like this can take on a person and these feelings of weakness and vulnerability could have really derailed the direction of my life had I not taken the proper steps to address them.

And part of this regaining of my composure after the robbery was realizing that my attackers were not smarter or stronger in body or spirit than me—they just had the gun, and it was from that moment forward that I decided one old gunnie chestnut to be the Gospel truth: it’s better to have a gun and not need it, than need a gun and not have one.

I have been concealed carrying for over 10 years now.  There have been incidents since then, but because I have a cool head and a gun on my pocket, there has been nothing I haven’t been able handle personally (and thanks in part to the unlikely timing of James Brown).