Some call it the XM 25 Counter Defilade Target Engagement System but to Guns.com it's simply The Punisher

During the first Iraqi war in the early 90s, a nation glued to their television sets laid witness to a new pinnicale in aerial bombing when video was broadcast of a smart bomb dropping down a chimney in Bagdad. In 2010, some 20-years since Desert Storm, Americans once again laid witnessed to the revolutionary use of smart bomb technology, this time in Afghanistan and now evolved into the acme of small arms, the XM 25 Counter Defilade Target Engagement (CDTE) System.

Much of the weapon’s philosophy of use came out of the need for individual counter defilade weapons (defilade being the military concept of covering troop formations from exposure to enemy firepower) that could hit targets behind cover without the operator changing positions. The niche for such devices became particularly apparent as the trench-style, urban warfare that characterized the battle-scapes of Iraq and Afghanistan began to take its toll on US squads.

Designed, patented and manufactured in the US, the four-round, 14-pound XM25 Counter Defilade Target Engagement (CDTE) System represents the next generation of grenade launcher derived from early prototypes of the XM29 OICW (variously described as a light semi-automatic 20 mm cannon, a grenade launcher and an airburst weapon) from Heckler & Koch.  H&K partnered with a US Company, Alliant Techsystems (ATK), in both design and manufacturing capacities on the XM25 while L-310S Brasher developed the weapon’s unique target acquisition and fire control systems.

Employing a laser sight and an aiming component, the XM 25 fires 25 mm grenades automatically calibrated by an internal ballistic computer to explode adjacent to a concealed target or otherwise indicated by the operator.

Though the operator aiming the weapon can override the laser and manually adjust the detonation zone by up to 10 feet, for most applications the weapon does the aiming for you via a built in laser-range finder. Upon firing, data is instantly downloaded to an embedded microchip in the 25mm cartridge; the ‘smart’ round calculates the revolutions to measure distance and timing of the boom. 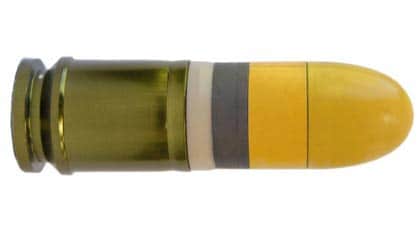 The weapon’s system also makes use of an fuse setter, a thermal sight and environmental sensors to help the computer navigate real world environments accurately.  ATK purports a range of 500 meters against point targets and 700 meters for area objectives—well over 1/3 of a mile.

The XM-25 fires a host of semi-automatic ammunition options and these offerings are likely to be expanded in the near future as the line is still under development. 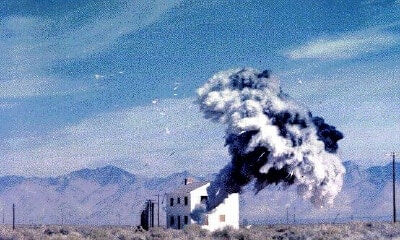 Thermobaric weapons, as called fuel-air explosives (FAE) because of their explosive component, rely on environmental oxygen to detonate and create a shock wave with significantly longer duration than other explosives, the effect leading to it being incorrectly described as a “vacuum bomb”.  The damage such an explosive can deal out is truly astonishing and the results quite gruesome or so would inform a study by the US Defense Intelligence Agency, which states of thermobaric weapons:

The [blast] kill mechanism against living targets is unique–and unpleasant…. What kills is the pressure wave, and more importantly, the subsequent rarefaction [vacuum], which ruptures the lungs…. If the fuel deflagrates but does not detonate, victims will be severely burned and will probably also inhale the burning fuel. Since the most common FAE fuels, ethylene oxide and propylene oxide, are highly toxic, undetonated FAE should prove as lethal to personnel caught within the cloud as most chemical agents.

ATK hand produced all 55 shells fired in the 2010 Afghani combat trials at a cost of $1000 per shell.  The a target price for when they go into production in 2012 is $25-$35 per cartridge.  There are also talks about a Non-lethal round that stuns opponents through the use of smaller explosives.

The field testing was done by the 101st Airborne Division in Afghanistan in October 2010.  This is where and when the XM 25 got its current nickname, ‘The Punisher’ (though it has also been referred to as Individual Semiautomatic Air Burst System, and the Bowling Tube).

US Troops reported the weapon to be extremely effective at taking out covered targets and were impressed by the range finders ability to instantly download distance to the internal ballistic computer, which pre-sets the aiming reticule, a HEAB (High Explosive Air Burst) grenade, then detonates exactly over the target.

In step with the success of these weapon evaluations, the US Army plans on having sufficient quantities on hand by end of 2012 to field the XM 25 as a standard military arm.

That is all good news, the price is another proposition.  Each launcher costs $30,000-$35,000 per copy with the unit price rationalized downward to a volume production target of $25,000 a weapon.  The initial issue will be for 12,500 units which is a significant first order of almost a third of a billion dollars (which should solidify the partners—ATK, H&K and the US Army—in the venture).