The U.S. military officially adopted the M16 in 1970, retiring the M14.  But through a kind of gun willpower, the 7.62 NATO battle rifle has stayed in service to this day.  Still, like any ’50s-era rifles, some modernization comes in handy.

Troy Industries has great success with their M14 chassis, all largely based on the MCS, or Modular Chassis System.  The idea is to replace the wood stock with aircraft aluminum, complete with rails, for designated marksmen, law enforcement snipers, and of course, M14/M1A enthusiasts.

The primary advantage to the stock system is, naturally, the rails.  It has four, for tactical gadgets and lights in addition to bipods and optics.  The top rail is long and monolithic, with ample room for any scope and backup iron sights.

They have several versions for everything from short-barreled rifles to full-length marksmen’s rifles, but despite the bulky looks, only add between .5-1.5 pounds of tactical goodness to the M14 or M1A once you remove all that organic stuff.  The one thing they have in common, unfortunately, is expense.  They don’t come cheap, with MSRPs starting at $600 and breaking a grand (although stores usually sell them for less, say $450-750.) 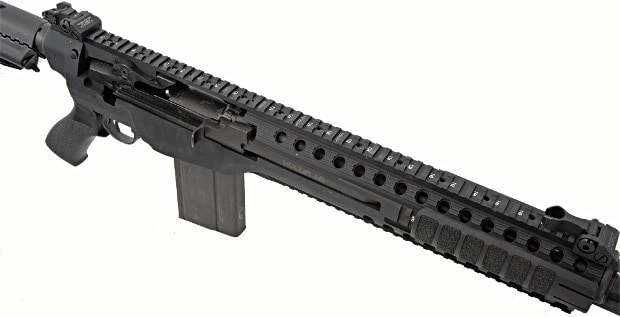 So This year Troy’s changing things up.  Of course they’ll continue to make the existing rail setups, but they’ll also have a new tri-rail upper, the BattleRail.  It replaces the original handguard top half and rear sight to give you a whole lot of optic-mounting rail real estate.  At the front of the handguard, two more side rails are there for any other tactical needs you may have.

This way you can keep the profile of your M14 or M1A but get a whole lot more options for accessories, not to mention, save some scratch.  The BattleRail has an MSRP of $280 and is already in stores for $210 and up.  It’s currently available in black and flat dark earth.

The M14 family of rifles has been punching .30-caliber holes in things for a very long time and it’s a great way to make noise, but the MCS dragged it into the modern era kicking and screaming.  We like Troy’s new BattleRail gets you 75% of the rail at a fraction of the cost, and honestly, we like the looks of it.

If you want to contemporize your sights on what is arguable one of the best battle rifles ever designed and built, you gotta check out Troy’s M14 furniture.