GunVault sent us a release about their new SpeedVault, a clever-looking drop-open holster safe that mounts under, say, a desk.  For when you need to go from TPS reports to gunfights in the push of a button, this is the safe for you.

It’s plenty sturdy, according to their press release, “The SpeedVault is constructed of tamper-proof, 18-gauge steel and available in digital lock or biometric finger print scanner. An activation button triggers a spring-loaded door that not only has a high-strength lock mechanism, but also performs reliably, time after time. Foolproof security is ensured with an audio and LED low battery indicator to help guard against direct tampering and unexpected power loss. Mounting hardware is included.” 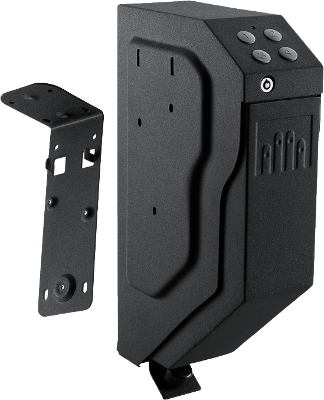 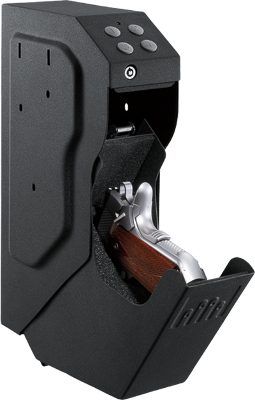 The SpeedVault’s dimensions are 3.5 x 6.5 x 13 inches, and it weighs over six and a half pounds; heavy enough to take a few licks but it won’t pull your furniture or whatever apart.  There are two models, one with a four-button keypad and another with a fingerprint scanner.  They have a backup cylinder lock in case the (not included ) nine-volt battery dies or something else happens to the electronics, like, uh, er, EMP.

Quick access being the point: we don’t often talk about these little safes because… well, they’re to keep guns away from children.  They’re marketed as “foolproof security” but as you’re about to see, pretty easy to break into.  This video, by the way, is full of naughty adult language (and drinking in the A.M.) but it’s incredibly revealing about the true nature of these types of gun safes.  NSFW, you’ve been officially warned.

Or skip to to the 9:30 mark to watch Deviant Ollam shred through a GunVault in a couple of seconds if you’re impatient.  But if you’ve got forty minutes to spare, watch the whole thing, it will change the way you perceive gun safes.  By the way, you can get a cheap tubular lock pick for about fifty bucks.

We love our guns and we don’t want anything bad to happen to any of them, but we have to point out that at best, safes like these are for foiling children and keeping up appearances.  Every single system tested was circumvented, even the fingerprint reader.  If you’re looking for a real security system, you gotta be prepared to spend.

All in all, though, his message and ours, if you really want to keep your kids safe—which about the only thing these safes do well, certainly not stop thieves—teach them about guns, too.  Because anyone can learn to pick locks online.