OK, this isn’t for you guys who are operators. If you own your own sub-gun, or your job requires you to handle/use M4s regularly, then just go away. There’s no need for you to stick around and sneer.

This essay is for all the schlubs like me who don’t often get a chance to get to play with full-auto toys. Who have thought, “oh, that’s no big deal. It’d be silly to pay the freight for rental sub-machine guns, dropping a couple hundred bucks in almost no time.”  Well, this is me telling you just do it.  Seriously. If you get the chance to give full-auto a go, don’t pass it up and here’s why:

I’m in my 50’s. There have been a bunch of times when I’ve had one or another offer to join in a sub-gun shoot. But there was usually something else I needed to do. Or I was feeling a bit under the weather. Or this. Or that. Whatever reason, I never got around to going.

I was an idiot but thankfully, my friends have more sense than I do. And recently I got together with a couple of the other BBTI guys to do a bit of shooting at a private range. Happily, this included shooting an H & K MP5 and a Walther MPL – both select fire guns in 9mm.

Keith retrieved the guns from the safe. We went over their operation and safe handling. He explained proper grip and stance. Then we busted out a couple dozen boxes of 9mm ball ammo and commenced to loading magazines.

When we had a bunch of those ready and waiting, we went out to the firing line. Again, Keith went over proper grip and stance, then demonstrated actually firing the guns, going from single shots to 3-round burst to full auto.

We started with the MPL. It’s a very simple little gun, without a lot of weight. Here’s a pic of it: 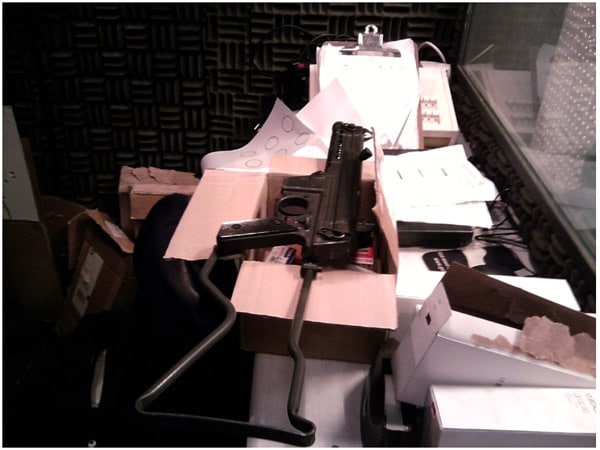 I put a new magazine in it. Chambered a round. Moved the select fire switch to ‘single’ so that I could shoot it a couple of times to get the feeling for it. It was very much like shooting any small 9mm carbine, and could easily have been my little KelTec Sub2000.

Then I set the switch to ‘burst’ and pulled the trigger.

The first thing that crossed my mind was that the gun had malfunctioned. That’s because I’ve shot guns before which had a ‘slamfire’ problem – the sort of thing that lends new meaning to the term ‘pucker’. I felt the adrenaline dump you get when Something Bad happens.

Then it registered that everything was going according to plan. This was what the gun was supposed to do. I pulled the trigger again. Another 3-round burst of fire. This time I was ready for it, braced for the recoil. Where as the first burst sent two rounds through the torso of the target (placed out about 10 yards) all three of the second burst connected with the torso this time. The third burst of fire was the same with all three hits.

I looked back at Keith and Jim, grinned. They grinned back at me. I set the select fire switch to ‘full-auto’.

Leaning into the gun a bit, I pulled the trigger. In what seemed about a second, the rest of the 15-20 rounds in the magazine were gone.

I was honestly surprised at the amount of recoil. Oh, each individual shot wasn’t bad, but the steady stream of fire compounded recoil upon recoil, pushing me back onto my heels a bit. The muzzle climbed, and the series of hits to the target shifted off the paper.

Keith laughed. Jim laughed. I laughed. Keith took the empty magazine, handed me a full one. “Do it again.”

I did it again. This time I knew what to expect.

We all shot both of the guns, Jim and I mostly taking turns, Keith (who is a firearms instructor for his department, and has trained their SWAT team) cycling in to give us pointers. By the time we had gone through all the ammo we’d brought, I was both exhausted and exhilarated, and had developed a new respect for what you could do with a sub-machine gun with a little training. Both Jim and I had gotten to the point where we could easily keep all the rounds in the torso when shooting full auto or put all the rounds from burst fire into the head of the target. 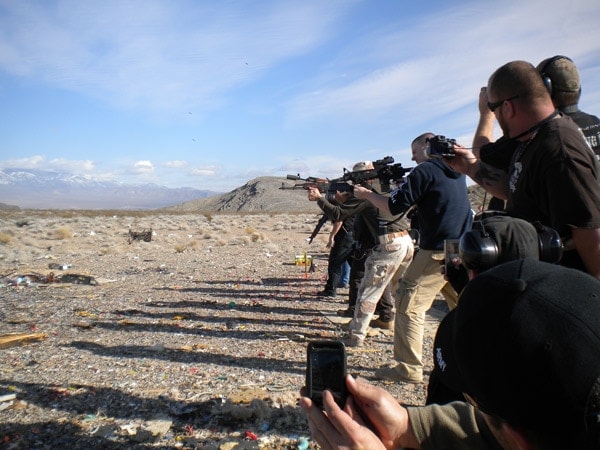 And while shooting the guns was immensely fun, I also just enjoyed watching the other guys shoot them. There is something almost beautiful about watching the streaming arc of spent cases, gold and glittering, spitting out of the side when the gun was being shot full-auto.

So yeah, I had been an idiot in not taking advantage of trying a full-auto gun previously. Of thinking that it was ‘no big deal.’  Now, I’m not hooked. I don’t have a burning desire to go through the hassle of getting a Title II weapon, and I don’t have the kind of money these things command.  But you know what? Next time the opportunity to shoot one presents itself, I sure as hell won’t be busy with something else.