The destruction of any functional firearm that is not being held as evidence in a criminal investigation doesn’t make any sense.  Why would authorities, police departments, federal agencies, etc., essentially choose to burn money?  Why not sell those seized firearms back to the public or to a licensed firearms dealer?

When seized guns are sold back to the public, it’s a win-win situation.  The municipality makes a little cash from selling the guns as opposed to shelling out dollars to have someone destroy them and the public gets access to inexpensive, used firearms.  Win-win, right?

Last week, the Georgia Senate Judiciary Committee unanimously passed S.B. 350, a bill that would require law enforcement agencies throughout the state to sell seized firearms not being held as evidence at a public auction to a licensed firearms dealer.  Current Georgia law allows for the immediate destruction of seized arms. 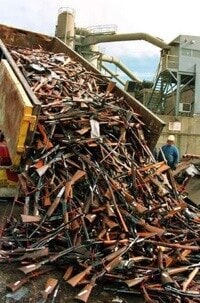 However, there is another key part of S.B. 350.  That is, if the firearm can be traced back to a lawful owner, than it shall be returned no later than thirty days after the court renders its final judgment.  If the lawful owner is not found, then it goes to auction.

The bill is fully supported by the NRA, which said it would prevent “the wasteful and expensive practice of destroying firearms that could be re-circulated through licensed dealers to the retail market.”

“Localities would be enabled with the ability to reap the benefits of the sale proceeds and consumers would have access to affordable firearms through licensed dealers, with all of the usual safeguards that apply to dealer sales to the public,” the NRA press release stated.

But the bill still has miles to go before it becomes a law.  The Senate Rules Committee now has to schedule a vote on the Senate floor.  Depending on how the state Senate votes will determine the next course of action.  So, if you live in the Peach State, you might want to get a hold of your local state Senator and tell him/her to support S.B. 350.

We’ll keep you posted as this common sense gun legislation makes its way through the legislative process.