Is the National Rifle Association going Angry Birds on us?

Well, it would appear so, as last week America’s foremost defender of Second Amendment rights announced that it had licensed MEDL Mobile, Inc., an incubator and aggregator of mobile technology (fancy words for ‘app designer’) to create and develop the NRA’s first entertainment shooting app, which “through various methods promotes gun safety via a series of educational information with a gaming environment.”

“We wanted to provide current and future shooters with an entertaining way to learn about gun safety, so we partnered with MEDL Mobile to create an experience in which users engage in target practice at the NRA Headquarters shooting range, enter tournaments, compete online and invite friends to participate, all while learning important firearms safety information along the way,” said Mike Marcellin of the National Rifle Association.

“The app will even allow users to look up state-by-state gun regulations and other helpful information, all within a fun, interactive game environment” Marcellin added.

Also weighing in on this unique partnership was Andrew Maltin, CEO of MEDL Mobile. 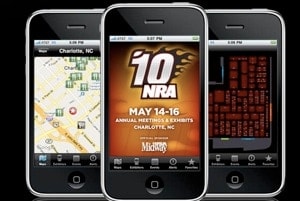 “The NRA needed a way to interact beyond its 4 million active members, an enormous following that may not otherwise engage with the organization — until now,” Maltin said in the press release.

“Reaching a very large membership and communication to supporters are a few of the many challenges a mobile strategy can help a business or membership organization overcome,” he added.

The NRA’s first interactive mobile game app is expected to debut this spring, according to the press release.

The challenge with this NRA app is striking the right balance between fun and educational programming/information.  While the two paradigms aren’t mutually exclusive (a game can be both fun and educational) it’s hard to come up with a creative and entertaining way to meet both demands.

Ideally, the NRA wants a game that satisfies their core audience (gun owners) and appeals to the public at large.  After all, entering the mobile app domain fits into a larger NRA objective: spreading the gospel of guns.  The more platforms (digital or otherwise) the organization exploits to win the hearts and minds of potential gun owners, the better.

I’m no gamer, so I’m afraid my advice for the NRA and MEDL Mobile is limited.  But for you guys out there who enjoy games and mobile apps, what advice would you give to the design team?