Silencerco has been tooling around with a new modular 5.56 NATO suppressor with quite a few tidy improvements, and they’re calling it the Saker.  With a base retail price of $900, it’s extremely competitive silencer with simpler, less flexible competition. 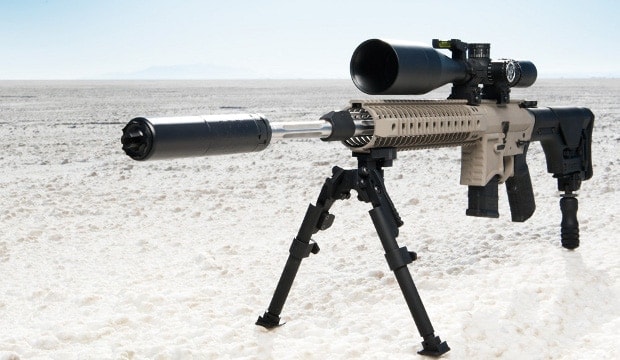 The Saker has three sections, the can containing the baffles, the front cap which can be interchanged to add a secondary flash hider, and a multi-mount end cap which can be swapped out depending on what kind of mounting system your rifle uses, aka the MAAD mount, the Multiple Accessory Attachment Device.

Why would you want a flash hider on the end of your can?  Well, if you’re pushing a lot of ammo through a silencer, it retains enough heat to cause even the expanded gasses to flash up again when they mix with oxygen outside the suppressor.  This is especially true if you’re running a short barrel, or full auto, or both.  Plus, if you ever strike the end cap with a bullet, it’s uncommon but it does happen, you can just replace it.

The modular mounting system is a nice touch for people who have existing quick-detach mounts from other manufacturers, or just a standard threaded barrel; and it’s nice for Silencerco who only has to make one type of can that works with a handful of different systems.  And like a standard threaded mount, the MAAD mount is designed to re-index to the same spot when it’s installed every time, so you don’t have to worry about your point of aim bouncing around any time you re-attach your suppressor.

The heart of the Saker is of course its new baffle system.  The material they came up with is more erosion-resistant and promises to last longer while still producing the desirable effect of suppressing sound.  They call it Hoplon after the extremely convex shields of the Greeks.  It is 60% harder than Inconel in terms of its Rockwell hardness, although the exact alloy they’re using is being kept secret.

And while all that’s cool and interesting, we’re most impressed by their simple and very effective new Trifecta RS flash hider.  It’s also a quick-detach mount for the Saker and the flash suppressor the Saker is designed around.

One of the interesting things that you don’t notice when you’re not shooting a suppressed firearm is that, if there is a flash hider in there, the flash hider rings.  It’s like a multi-pronged tuning fork.  The Trifecta RS—Resonance Suppression—uses three prongs of different lengths; in effect, they can’t carry a tune.

According to GearScout, with the Trifecta quick-detach MAAD mount and Trifecta RS flash hider, the total price for the Saker comes to $1200, which is still reasonable for a suppressor in this class.

Silencerco is one of the leading innovators in the sound-suppression field.  With their new Saker, they’ve proven they don’t stand still.  Expect to see the Saker in June, with more details and technical specs, and additional mounting systems to follow shortly thereafter.