What goes through the Mind of a Sniper before he pulls the Trigger?

It’s an interesting question, “What goes through the mind of a sniper before he/she pulls the trigger?

Unfortunately it’s one that I’m ill prepared to answer with any firsthand insight, as I’m not a sniper or a military marksman.  And to be perfectly honest, I’m actually a bad shot compared to most of my friends.  So, I’m not an expert in this field and if any of you guys or gals have firsthand knowledge of what it’s like to be a military trained marksman or sniper please chime in.

(Note: there’s a slight distinction between the term “sniper” and “marksman.”  A sniper is typically a lone operative or one who works with other snipers, whereas a marksman operates as part of a larger unit of troops.  But for sake of ease, I’ll use the terms interchangeably)

With that disclaimer out of the way, I think one of the most helpful ways to answer this question is to look at what the deadliest marksman in U.S. history had to say on the subject.

I am, of course, referring to Iraq War veteran and former United States Navy SEAL Chris Kyle, who has upwards of 255 claimed kills, 160 of which have been officially confirmed by The Pentagon. 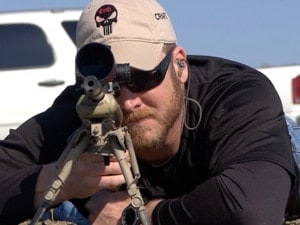 In a BBC News Interview, Kyle was asked about his first kill and what was running through his mind before he took the shot.

It was 2003; Kyle was given a sniper rifle and told to cover a Marine battalion as it entered war-torn Fallujah.

A group of Iraqis approached the Marines to welcome them.  Within that group there was a woman with a small child and a grenade in her hand.  She was preparing to detonate it.

Kyle noticed the woman through his scope.  He was faced with an obvious dilemma.

“This was the first time I was going to have to kill someone. I didn’t know whether I was going to be able to do it, man, woman or whatever,” he said.

“You’re running everything through your mind. This is a woman, first of all. Second of all, am I clear to do this, is this right, is it justified? And after I do this, am I going to be fried back home? Are the lawyers going to come after me saying, ‘You killed a woman, you’re going to prison’?”

Time was running out.

“She made the decision for me, it was either my fellow Americans die or I take her out.”

He pulled the trigger.

That was his first kill, but it wouldn’t be his last.  And it makes one wonder how he coped with the reality of killing people.

“It is a weird feeling,” he admitted in the interview. “Seeing an actual dead body… knowing that you’re the one that caused it now to no longer move.”

Does he have real remorse for those individuals he has put down?

“Every person I killed I strongly believe that they were bad,” he said. “When I do go face God there is going to be lots of things I will have to account for but killing any of those people is not one of them.”

Kyle may not have remorse for the lives he has taken, but he certainly feels regret for the ones he couldn’t save.

Two of his fellow SEAL brothers were killed in an operation in Ramadi.  While there’s probably no way Kyle could have actually prevented the death of his friends, he still feels responsible (one died from complications after being shot by an enemy sniper, the other was shot while trying to shout a warning to fellow SEAL team members). 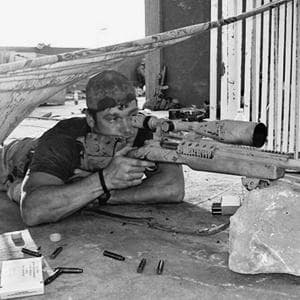 “My only regrets are the guys I couldn’t save. That’s what keeps me up at night,” he said. “But every shot I took, I feel extremely justified.”

It should be noted that all snipers feel the way Chris Kyle does.  There are those who have mixed emotions about the lives they have taken, especially when they begin to question the motives of a war.

Ilya Abishev, a former soviet sniper, fought in Afghanistan in 1988.  He was so immersed in Soviet propaganda that he was absolutely convinced what he was doing was right.

But then he became disillusioned with the Soviet Union and regret set in.

“We believed we were defending the Afghan people,” he told the BBC. “Now I am not proud, I am ashamed of my behaviour.”

Overall though, it would appear that most snipers feel that they are justified in doing their job.  A study of 150 snipers in Afghanistan revealed that snipers tend to score lower on tests for post-traumatic stress and higher on tests for job satisfaction than the average soldier.

“By and large, they are very healthy, well-adjusted young men,” Peter Bradley at the Royal Military College of Canada told the BBC. “When you meet them you’re taken by how sensible and level-headed they are.”

I suppose for many of snipers it’s often a decision between the lives of friends, countrymen, fellow soldiers and the lives of enemy combatants.

In the end, and as Chris Kyle pointed out, it’s a decision that’s often made for them.

Perhaps, that’s why most snipers are at peace with their job.