Bogota, the capital city of Colombia, is now conducting one of the largest gun control experiments ever attempted.

The architect of the ban is the city’s Mayor Gustavo Petro, a former guerrilla who is no stranger to gun violence, he fought with the terrorist 19th of April Movement.

If the gun ban works, if the homicide rate drops in the city, law-abiding citizens can expect to say goodbye to their gun rights, as they know them.

“People who own guns legally can still keep them at their homes or at their offices. But they can no longer bring them to public places, carry them while on the streets, have them in their cars,” Petro’s chief of staff, Antonio Navarro Wolf, explained to the BBC.

“By doing so we will be protecting them from two things: from becoming a target for criminals who might want to take their weapons, and from using their guns in a moment of madness,” Navarro added, who was also a former M-19 guerrilla.

Currently, Columbia has one of the highest homicide rates in the world, coming in fifth right behind El Salvador, Iraq, Jamaica and Honduras, according to The Global Burden of Armed Violence 2011, a report issued by the non-governmental group Geneva Declaration.

This gun control experiment will hopefully lead to a solution that changes those unsettling statistics, officials say.

But many critics of the experiment argue that (a) it leaves the law-abiding public more vulnerable and (b) criminals won’t obey the gun ban.

Moreover, critics point out that the majority of homicides involve firearms that were brought into the country illegally by drug cartels and left-wing guerrilla organizations.

But Navarro claimed that according to a study conducted in the 1990s, one in three gun-related homicides involved a legally acquired firearm.

“And the truth is, we really don’t know” how many deaths by firearm involve legal weapons, he told the BBC.

“Very few of the guns used involved in homicides are ever seized by the authorities, only 10%. And with such small numbers is not possible to infer how many are legal and how many are not” Mr Navarro explained.

“What we do know is that there are legal weapons involved in homicides, especially in fights and acts of intolerance.”

“And we know there were some 1,600 homicides in Bogota last year, and more or less 60% involved firearms,” he added. 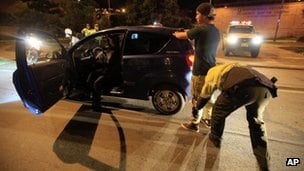 So, with those statistics in mind, Mayor Petro and company are going to take a spread-shot approach and shake down everyone to ensure compliance with the ban.

If this scenario sounds familiar, that’s because it is.

Think of the parallels between present day Bogota and New York City circa 1910.  Both cities were plagued by institutional corruption and organized crime.  Both elected former gangsters into public office.  Once in office, both politicians make strides to disarm the law-abiding public.

Well, we know what happened in New York City; organized crime grew rapidly and reached a fever pitch in 1920 when prohibition was passed.

What will happen in Bogota?   We shall see.

But I suspect that a temporary ban might actually reduce crime for the duration of the experiment.  See, criminals will just wait it out and conduct business elsewhere.

However, once it’s over and a permanent ban is instituted because the temporary ban “worked,” crime will rise and drug-related homicides will likely rise as well.

To reduce crime and violence, Columbia has to address its real problems: drug trafficking, organized crime, and government corruption.  Until that happens, it shouldn’t expect to see itself drop on The Global Burden of Armed Violence report.