Building a complete AR from scratch can be a daunting task for some, but it’s not. It’s surprisingly simple to assemble just the lower.  Say you want to build that Stoner’s Black Rifle you’ve always wanted, but are on a budget, then you need to think about completing the lower yourself. It’s the best way to start.

First up, you probably want to know who makes a good stripped lower.  There are quite a few brands out there and we have to mention, because the lower isn’t a stress part, that picking the right one comes down to preference, and if your preference happens to be whatever is cheapest, we won’t hold it against you. 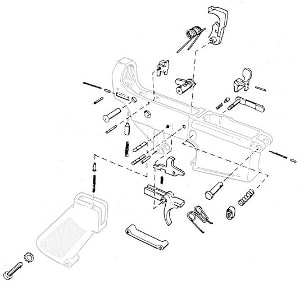 Honestly, just about every lower you look at will be fine.  Spike’s Tactical makes some of the most popular, quality ARs and they sell their stripped lowers for just a Benjamin.

Spike’s sells six different models of stripped lowers that are all pretty much the same–the differences are cosmetic.  They’re all machined from forged lowers made from 7075-T6 aluminum and finished with type III class 2 hard anodizing.

Spikes also sells kits to complete a stripped lower, with all the pins and springs necessary.  From their shop you can have a complete lower for less than $250.

But there are lots of companies that offer similar deals.  Palmetto State Armory is probably one of the best bargains out there and their rifles and rifle parts are top shelf.  They just also happen to be extremely wallet-friendly.

Their stripped lowers run a scant $80, and are often for sale for $56 shipped.  From our own experience these type-III class-2 hard-anodized forged lowers are clean, precision-milled, and well-finished.  You can triple your budget and still not get a better lower. 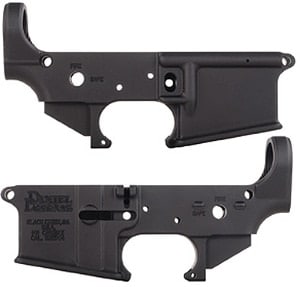 Palmetto offers kits to finish your lower, too, for as little as $100.  That means you can build a complete PSA AR lower for under $200, and for just $150 if you catch a deal.  But they go one step further and include kits that let you complete your lower and include a completed upper.

Their rifle kits start at $500 and they don’t skimp on the features.  They have full-auto bolt carriers that are magnetic particle-inspected and come with Carpenter 158 bolts. But they also sell higher-end offerings, which cost around $700, and include things like double-chrome lining and high-pressure testing.

Which brings us back to the point: the interesting business happens in the top half of the rifle.  The lower, well, it’s there and you need one, but almost any one will do.

Once you do pick out your lower and the parts to complete it, then you have to build.  But that’s easy, too.  Here’s a great video that—in 12 minutes—shows you how to finish a lower.  About the only specialized tool you need is a castle nut wrench (although a set of punches and mallet are a good idea, too).

The best part about it is getting the chance to learn how your rifle works inside and out.  And if anything ever goes wrong you’ll probably know just how to fix it yourself.

We’re sure more than a few of you have already gone down this road, so What are your preferred stripped receivers?