Beretta’s ARX-160 has been in full production for some time now in Italy. The new rifle is in service around the world and will hopefully soon go into U.S. production.  But while we’re waiting, they’ve introduced several new models of ARX-160. 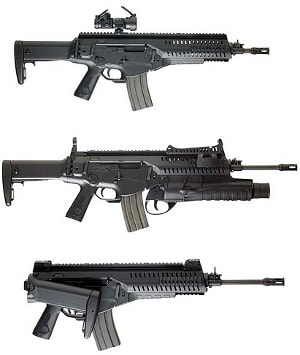 If you aren’t familiar with the rifle, the ARX-160 is an improved carbine that’s designed around modern small arms manufacturing and materials, i.e. plastic, and requires very little lubrication.  These guns have polymer upper and lower receivers, although they’re no featherweights.  With a 16-inch “lightweight” barrel the ARX-160 still weighs in at 6.8 pounds.

The rifle, like many of 21st century designs such as the ACR, SCAR and XCR, uses a short-stroke gas piston and has a monolithic upper rail.  Although plenty of ARX features are unique.  First up it has a quick-change barrel system that releases literally with a push of a button.  All of the controls are ambidextrous or reversible and the user can change which side the rifle ejects on, also with the push of a button.  And since it doesn’t need a buffer, it has a folding telescopic stock.

Since the rifle’s barrel can so easily be changed out, you can swap calibers with one pretty easily.  It’s available in 5.56 NATO as standard, and it accepts STANAG magazines.  It’s also chambered in 5.45x39mm, 6.8 SPC, and 7.62x39mm.  In Europe they already have ARX-160 receivers that use AK magazines.

Beretta’s commissioned two new 160s in .22, made by Umarex.  One is a full-size rifle and the other is a cut-down version made into a pistol.  These will likely be available in the U.S. before the real thing, but they’re also going to be a lot less expensive.

At SHOT Show we couldn’t get a firm price on the upcoming .22s, but Beretta did tell us that the MSRPs would be between $500-600.  As far as when will we get the grown-up versions?  Two years, late 2013, give or take some projections.