It’s time for a public service announcement.  Hornady’s had to issue a recall on several lots of .500 S&W Magnum ammunition due to the possibility of over-pressured rounds and they don’t want to cause any kabooms.

The ammo in question is .500 S&W Magnum 300-grain polymer-tipped FTX Custom LEVERevolution cartridges, stock or item number 9249.  The lots were shipped between September 9, 2010, and October 17, 2011 and the specific lot numbers to worry about are: 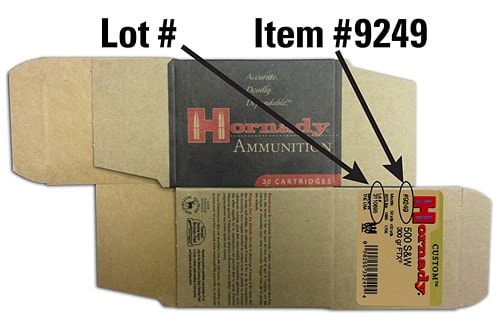 If it’s not from those lots or it’s not that item number, Hornady’s ballisticians have declared you in the clear.  If you do own some of those high-risk cartridges, call Hornady and they’ll set you straight; 1-800-338-1242.

But all that being the case, don’t let a few boxes of hot ammo keep you from trying the .500 S&W Magnum. 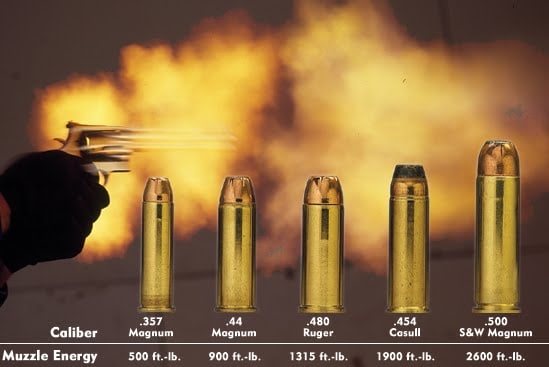 Designed and produced by Smith & Wesson and Cor-Bon in 2003, the .500 S&W Magnum’s primary intent was to put the .454 Casull in its place make a handgun cartridge that could take all large American game.  It fires a .500-inch diameter bullet, the maximum allowed by law without having to register it as a destructive device.  It moves 300- to 700-grain bullets up to and over 2,000 FPS generating as much as 1,800 foot-pounds of force.

That’s right, a shot of .500 S&W Magnum has the same amount of energy as a round of 5.56 NATO except it’s driving a bullet that’s up to ten times the size and half an inch across.  It can operate at pressures as high as 60,000 PSI, which has us wondering just how how hot is this Hornady stuff, anyway?

It bears mentioning that item number 9249 is their LEVERevolution stuff, so the pressure could be quite high as this ammo is intended for rifles, not just revolvers, where pressures can get maxed out.  That’s right S&W .500 Magnum is handy in rifles, too. As a semi-rimmed cartridge it feeds well from magazines.

S&W .500 Magnum isn’t for everyone.  But that doesn’t mean you should pass it over if you ever get the chance to shoot one.  We’re not saying it’s a must-have, far from it.  But you should at some point try it: it will put a grin on your face.  Just don’t try this particular batch of Hornady ammo.  That you need to send back.