FP-45 Liberator: One of the Most Powerful .45-Pistols of WWII

I read a review of the Stinger 9mm Liberator handgun recently and it has me wondering about the original Liberator: the FP-45.

The new 9mm homage is a familiar concept accurately described as get-off-me-guns.  If they have an intended purpose, they are only meant to be a last-ditch self defense pistol.  But the FP-45, similar in so many ways, had bigger ambitions. 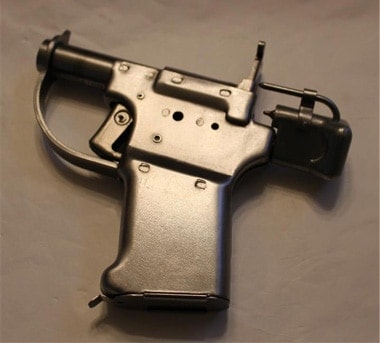 Back in the day—stop me if you’ve heard this one—Germany had some audacious ideas about foreign policy.  They got a bit greedy.  Took what wasn’t rightly theirs.

Many brave and brilliant people put their minds and bodies into the effort to make Germany behave.  They resisted German occupation, often violently.  From their efforts came an enigmatic idea—a small gun that could be dropped behind enemy lines.  Actually not one gun—a million guns.  So many that the enemy could never confiscate all of them.  And the guns didn’t have to be used—just knowing that they were there would mess with the heads of the Aryan occupiers and cause a collapse of German morale.

These ideas weren’t new.  The Winchester ’97 Trench Gun had devastating effects on the morale of Germans in WWI.  These same ideas are still present in many people’s arguments for concealed carry—criminals are less likely to commit crimes if their victims may be armed (or if they think their intended victims might be armed).

Designed by the US Army Joint Psychological Committee, the FP-45 is tiny, but it shoots .45 ACP.  The gun was easily mass produced—the Inland Guide Lamp Manufacturing Division of General Motors made somewhere around a million of them.  To cover their tracks, Inland labeled the new gun a Flare Projector.

And the gun, as far as guns go, might as well have been a flare projector.  As a weapon, it isn’t much.  But as an idea… 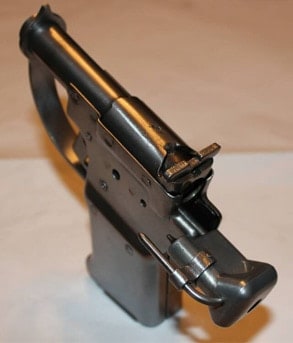 Manufacture a million of these; package them with ten rounds of .45 ACP and a diagram that illustrates how to load it, drop them into occupied territories, and those who wish to resist their occupation will have an effective tool to do so.

If a German soldier was caught unaware, an FP-45 might allow a resistance fighter to kill or incapacitate him, and then pick up better weapons.

Did this ever happen?  Not as had been originally intended.  Why didn’t we drop them in Europe?  I can’t find a good answer.  Someone who knows more about the OSS might be able to answer the question.  But they were used in China and in the Philippines, and then the FP-45, or the idea, got a second chance in Vietnam as the Deer Gun.

And now?  The FP-45 is a big time collector’s item.  Finding an FP-45, its box, and its instruction sheet could get you a nice 15 minutes of fame on Antiques Roadshow.  You’ll be able to find some replicas and reproductions online. Price will vary by dealer, but you’ll be looking at $600 or so.

The FP-45 might be one of those obscure chapters of WWII history that leaves video game designers asking “what if,” sorts of questions.  Come on, Call of Duty.  We’re waiting.