Developed by the United States Army’s Tank Automotive Research, Development and Engineering Center (TARDEC), the CERV is a high-performance all-wheel-drive hybrid with a top speed of 80 MPH and it can climb grades up to 60 degrees.  It has a series hybrid engine, meaning the drive train is electric and the diesel engine runs a generator.  It can run silent for eight miles.

The electric power plant is capable of generating over 5,000 foot-pounds of torque while consuming about 25% less fuel than similarly-sized vehicles.  The “Q-Force” engine system is actually a commercial powertrain, a low-cost high-efficiency model designed by Quantum Fuel Systems Technologies Worldwide. 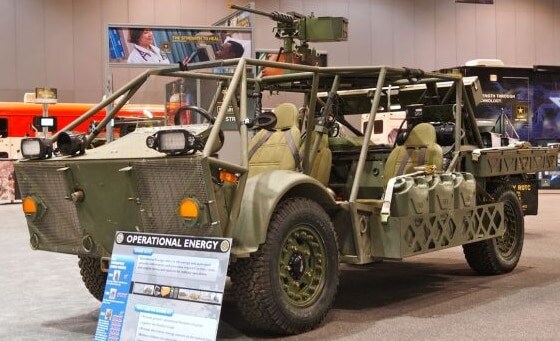 TARDEC claims that not only is the CERV more efficient, it will help save lives, though it should be pointed out that its life-saving capabilities stem from it’s ability to infiltrate and exfiltrate locations quietly, not because it’s an armored behemoth.  In order to have its range and efficiency, it’s clearly skeletonized to save weight.

It can also be configured in other ways not yet imagined, although we like the looks of that Ma Deuce up there and hope they keep it around.  So far the next step in development is to use exotic materials like carbon fiber and titanium to make it faster, lighter, and maybe a little more bulletproof. 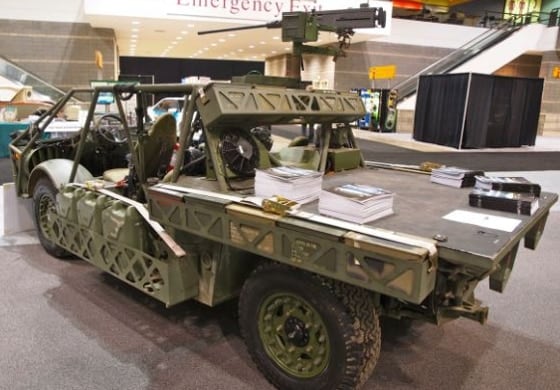 This introductory model is designed to transport a driver, two passengers and a gunner, along with any cargo they want to lash to its flatbed in back.

“Quantum’s high efficiency powertrain technologies help to save fuel, while enhancing vehicle performance and versatility,” said Alan P. Niedzwiecki, President and CEO of Quantum. “Our new generation powertrains are ideal to support tactical operations in both urban and un-urban environments across the broad range of U.S. military operations and terrain profiles, for direct action, reconnaissance, and unconventional warfare and counter terrorism.”

While somewhat innovative and probably handy for the right type of mission, we think that vehicles like this are going to get a lot more attention paid to them by the military, if only because they will eventually pay for themselves.  As it stands, a gallon of fuel can cost up to $400 when you take into account the costs of transportation.  And the Army uses a lot of it.

The question then becomes, hey, this thing’s gotta be street-legal, right?  What would it take to get you behind the wheel of a CERV?